India chased down the 110-run target with 13 balls to spare.

After senior wicketkeeper-batsman Dinesh Karthik was dropped from the two-match Test series against West Indies, questions were doing the rounds whether it is all over the seasoned Tamil Nadu glovesman. Karthik proved his detractors wrong on Sunday.

DK, who smashed a six off the last ball in the Nidahas Trophy final against Bangladesh that saw India lift the title, guided India to a five-wicket victory over West Indies in the first T20I at the Eden Gardens on Sunday.

Going down the order, I wanted to just absorb the pressure and try to help the team win, that’s my role. As a senior player, I keep telling myself, need to absorb pressure, but at the same time play positive cricket, make sure I bat through and take on the bowlers. I didn’t need to bat at a 150 strike-rate in this game, Karthik, who scored just three boundaries and a six, during his 34-ball 31, said after the match.

India were in a spot of bother at 45/5, after being set a 110-run target and were able to cross the finish line purely due to Karthik and Manish Pandey, who managed to stem the flow of wickets after Oshane Thomas caused havoc at the top.

It’s a good wicket, there’s a lot for the bowlers. This is good to bat on too, but there’s always something for the bowlers. I think we shouldn’t get too carried away by the score, the balls they bowled to Rohit Sharma and Shikhar Dhawan were special, he said. 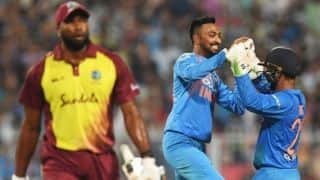