India stamped their dominance over West Indies by defeating them by an innings and 272 runs on Day of first Test in Rajkot, their biggest win by innings.

India stamped their dominance over West Indies by defeating them by an innings and 272 runs on Day 3 of the first Test in Rajkot. The visitors were bowled out twice on the same day with spinners R Ashwin and Kuldeep Yadav helping themselves to wonderful returns. Ashwin s 4/37 gave India a massive first-innings lead of 468, after which the home team enforced the follow-on. In the second innings, chinaman Kuldeep recorded his maiden five-wicket haul as West Indies collapsed for 196, giving India their biggest win in Tests (by an innings).

Chinaman Kuldeep had finished with slightly expensive returns of 1/62 in the first innings, but come the second, the 23-year-old bamboozled the inexperienced West Indies batting order by becoming only the second bowler after Bhuvneshwar Kumar to record a five-for in all three formats. Kuldeep took over after Ashwin who had scalped his fifth wicket of the match by taking out captain Kraigg Brathwaite at the stroke of lunch and ripped through the middle order. Only Kieran Powell played a fighting innings of 83. Ravindra Jadeja supported Kuldeep with 3/35, adding to his memorable match.

Powell was ruthless from the word go. He got West Indies off the blocks by hitting India s best bowler from the first innings Ashwin for a boundary and a six off the offspinner s first two overs before taking on pacers Mohammed Shami and Umesh Yadav. Ashwin was carted for one more six, and Powell was strokeful in his approach despite wickets falling at the other end. His 93-ball innings included four sixes and eight boundaries.

At the other end, the other batsmen were being overwhelmed by Kuldeep. From 79 for 1, West Indies slipped to 97/4. Debutant Sunil Ambris was foxed by a googly and out stumped, Shai Hope was pushed onto the backfoot to be given out leg-before. He bowled full to Shimron Hetmyer, who sliced the ball to backward point. With Roston Chase, top scorer from the first innings, partnering Powell, West Indies had one last ray of hope, but this wasn t Sabina Park from 2016 where he would bail his team out of trouble. Chase found Ashwin at cover and West Indies were five down for 138.

Powell s dismissal, 17 short of his century was the final nail in the coffin. Keemo Paul 47 in the first innings helped himself to a run-a-ball 15 with two fours and a six before he found Umesh in the deep. Devendra Bishoo survived a caught behind appeal but India reversed the decision by reviewing the call. Shortly after tea, Ashwin and Jadeja removed the final two batsmen, handing India victory inside three days.

Resuming the day at 94/6, West Indies were bowled out inside the first session. Overnight batsmen Paul and Chase batted with defiance to put on 73 runs for the seventh wicket, before Umesh broke the partnership. Ashwin then picked up the last three wickets to finish with 4/37. Having attained a colossal first-innings lead of 468 runs, India enforced the follow-on.

Chase and Paul continued from where they d left off on Friday, going after the bowling. The move seemed to pay off as eight boundaries were scored in the first seven overs of the day. Chase swept Kuldeep with precision to piece the gap between square leg and deep midwicket. Everytime the ball was bowled outside off, the batsmen put away the half-volleys to the fence.

Both batsmen used their feet well and were helped by certain pleasantries. Paul, the aggressor of the two, took Shami for consecutive fours in the 33rd over, and tonked a six off Kuldeep. In between, there were signs that both batsmen were struggling to read the spinners. But with boundaries coming frequently, Virat Kohli introduced Umesh for Shami. Three short of a half-century, Paul found Cheteshwar Pujara at mid-on.

Bishoo slogged and collected three boundaries to remain unbeaten on 17 off 26 as Ashwin took out the remaining two wickets. Sherman Lewis was left gasping at the carrom ball that took out his off stump, while Shannon Gabriel tried to flick a doosra for Rishabh Pant to affect his first stumping of the match. 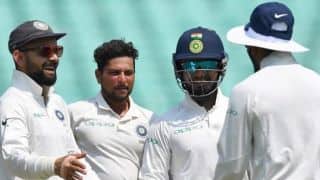 STATS: India's biggest wins by an innings in Tests