Sharma said that several celebrities are expected to attend the match.

Tibetan spiritual leader Dalai Lama will bless the India and West Indies cricketers ahead of the fourth One-day International (ODI) at the scenic Himachal Pradesh Cricket Association (HPCA) stadium here on October 17. Both teams now head to the picturesque town in Himachal Pradesh following the cancellation of the third ODI in Vizag owing to cyclone Hudhud. The venue will be host its second-ever ODI.

“It is a great honour for us that His Holiness has confirmed his presence for the match. He is usually travelling around the world but this time he happens to be in the country,” Sanjay Sharma, spokesperson at HPCA, told PTI on Monday. Talking more about his visit, Sharma said, “Though His Holiness will not be around for long, he will meet the players on the field right before the start of the match and tie Tibetan scarves around the players’ neck”.

Interestingly, the players of the visiting England team were not able to meet the Dalai Lama at his headquarters during an ODI in January 2013. It happened to be stadium’s international debut game. “His Holiness last visited the stadium in 2012,” said the spokesperson referring to one of the Indian Premier League games.

Sharma said that several celebrities are expected to attend the match. Sale of match tickets have begun both online and over the counter and the organisers expect the sales to pick-up over the coming days. “About 17000 tickets are available for general public. By yesterday, we had sold about 2000 tickets online and today we have opened the retail counter,” Sharma added. The overall seating capacity is 19000. Before Glenn Maxwell, Chris Pringle defended two runs in last over of an ODI 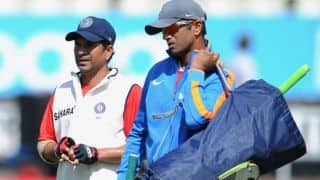