Umesh Yadav had leaked 36 runs his four overs in the previous match at Kolkata.

West Indies Twenty20 International captain Carlos Brathwaite won the toss and elected to field in the second match of the three-T20I series against India at the newly-built Ekana International Stadium in Lucknow on Tuesday. India lead the series 1-0 after an edge-of-the-seat thriller at the Eden Gardens on Sunday.

West Indies made just the one change, which was going to happen with Rowman Powell, who has played the entire ODI series and the opening T20I match, returning with meagre scores. He makes way for Nicholas Pooran, who has played three T20Is. Pooran was the second-highest scorer for Barbados Tridents in the Caribbean Premier League this year.

Don’t know what the pitch will be like and a little bit of dew as well. Coupled with the fact we bowled very well the other night. Nicholas Pooran is in for Rovman Powell. He lends more balance to the side, Brathwaite said at the toss.

Meanwhile, India too made one change with Bhuvneshwar Kumar, who was down with stomach cramps in the previous match, back in the side in place of Umesh Yadav, who leaked 36 runs his four overs at Kolkata.

We were looking to bowl first. Not sure how the pitch is going to play. Black soil and a tinge of grass. Hopefully, it will hold up. Fair amount of dew for both innings. We’ve got Bhuvi back for Umesh. Unfortunate for Umesh to miss out after just one game but that’s how the team composition goes, stand-in India captain Rohit Sharma said at the toss. 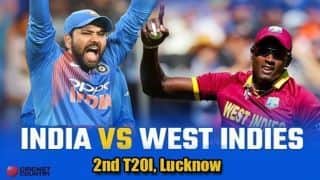 No point of playing Test cricket like this: Bangladesh stand-in captain Mahmudullah