At lunch on the fourth day of the Test, Rahane was batting on 90 while Hanuma Vihari was unbeaten on 57.

Ajinkya Rahane moved closer to his Test hundred while Hanuma Vihari scored an unbeaten half-century as India extended their lead to 362 in the first Test against West Indies at the Sir Vivian Richards Stadium, North Sound, in Antigua on Sunday.

At lunch on the fourth day of the Test, Rahane was batting on 90 while Hanuma Vihari was unbeaten on 57.

India lost Virat Kohli shortly after they resumed on the overnight score of 185/3 as Roston Chase, who had scalped two wickets – Mayank Agarwal and KL Rahul – on day three, dismissed the Indian skipper on his overnight score of 51.

However, the pair of Rahane and Vihari scored at a brisk pace as India strengthened their grip on the series opener. On the stroke of lunch, the two completed an unbeaten 100-run stand.

The two joined forces when India’s score was 187/4 and made sure that the team did not lose any wicket before the lunch interval.

Rahane, who had scored 81 in the first innings, was solid in his approach while Hanuma Vihari, who brought up his second fifty in the longest format of the game, took his chances and scored at a brisk pace as India added 102 runs in the first session of day four. 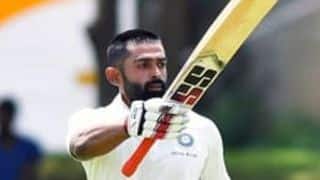