Sourav Ganguly is convinced India should try Pant ahead of Saha for the Antigua Test starting Thursday.

Of the many conundrums India face regarding their team composition for the first Test against West Indies in Antigua, the toss up between Rishabh Pant and Wriddhiman Saha for the wicketkeeper’s slot remains vital. For three years, ever since MS Dhoni retired from Test cricket in early 2015, Saha has been India’s first-choice wicketkeeper in Tests before his injury paved the way for Pant.

The 21-year-old, since his debut has, created quite the stir. In nine Tests, scored 696 runs at an average of 49.71 with two centuries and two fifties. Besides, he has effected 42 dismissals behind the stumps and is eight away from becoming the fastest Indian wicketkeeper to 50 dismissals.

Perhaps the same X-factor that has made the 21-year-old Sourav Ganguly‘s preferred choice ahead of Saha for the first Test. Ganguly, who was the mentor of IPL franchise Delhi Capitals last season, has followed Pant from close quarters and the former India captain has backed he is the ideal choice even though Saha performed wicketkeeping duties during the three-day practice match against West Indies Board President’s XI.

READ: The dilemma facing India ahead of 1st Test

“For India, the most important aspect will be team composition. After his impressive showing in Test cricket in Australia and England, Rishabh Pant should be starting ahead of Wriddhiman,” Ganguly wrote in Thursday’s column for Times of India.

India also need to decide between Rohit Sharma and Ajinkya Rahane for No. 4, if they are to go with a fifth specialist bowler but Ganguly, surprisingly, has backed India’s leading run-scorer in the 2019 World Cup to open in Tests. The move, as per Ganguly, will allow Rohit to flourish from the slot he has had tremendous success in the shorter format and also allow Rahane to get some runs from No. 4.

“But, for India the major decision is whether they want to play Rohit or Rahane. It was a similar situation in South Africa. My suggestion would be to let Rohit carry on his good form from the World Cup and settle in the opener’s slot while Rahane continues his good work of lending stability to the middle-order,” he said.

Ganguly also vouched for the inclusion of allrounder Ravindra Jadeja for Hardik Pandya, for it united the spin duo of Ashwin and Jadeja, that has had reasonable success in Tests for India.

“The absence of Hardik Pandya provides an opportunity to Ravindra Jadeja to fill in a slot where he can be a useful batter and the second spinner, which the management seem inclined towards. Ishant and Bumrah are certain and I would prefer Shami over Bhuvneshwar, simply because of his superior ability in Test cricket. As for the specialist spinner, it should be the experienced Ashwin first and that would bring back the old pair of Jadeja and Ashwin together,” he said. 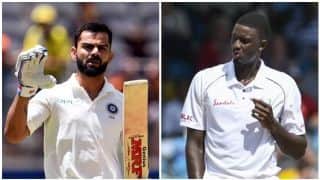 IND vs WI, 1st Test, India vs West Indies LIVE streaming: Teams, time in IST and where to watch on TV and online in India 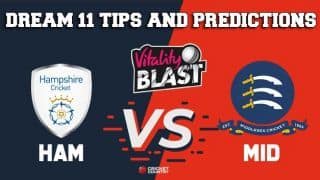