India are on the verge of registering their ninth successive series win against West Indies.

If you’re an India fan, you need not worry, Virat Kohli‘s side cannot lose the series against West Indies when both sides square off in the third and final ODI at Trinidad on Wednesday. India won the second one-day international by 59 runs (Duckworth-Lewis method) at the same venue to gain a 1-0 lead after the series opener in Guyana was abandoned due to inclement weather.

With scores of 1,23, 3 in the three-match Twenty20 International series and another single-digit 2 in the second ODI, Dhawan has been troubled by the incoming delivery twice he has fallen to Sheldon Cottrell. Since he’s not part of the Test squad, the left-handed batsman would want to finish his assignment in the Caribbean on a high.

As far as Pant is concerned, his temperament has been an issue. Yes, the X-factor and the talent is there, but the young wicketkeeper-batsman now needs to vindicate the trust reposed in him by Kohli, who has made it very clear that the team management will give the youngster a longer rope.

Pant walked out at No. 4 in the previous match and since he was being bogged down by the back of a length ball, he resorted to playing an erratic shot and was dismissed for just 20. He can use this match to find some momentum going into the Test series as the only specialist wicketkeeper.

On the other hand, West Indies will be hoping for an improved batting performance to draw level in the three-match series. None of their batmen showed any application or grit. After being in a position of strength at 148/3 chasing 280, the home side collapse and allowed their opponents to get back into the game. Jason Holder‘s side will want to lift themselves up for this one which will save them the blushes of another series defeat and give the Universe Boss Chris Gayle, who may be playing in his last home match, a grand send-off.

India, meanwhile, are on the verge of registering their ninth successive series win against West Indies.

A full match is unlikely to be possible with rain being forecast through the day.

On TV: Sony Network (in India)

India are known not to tweak their winning combination. Dhawan will get another chance to regain his form and so is the case with Pant. However, the team management may opt to make one change in the bowling department by giving Navdeep Saini a run in the last ODI and rest Mohammed Shami.

A lot of the batting depends on talents like Shimron Hetmyer, Shai Hope and Nicholas Pooran, who have impressive lately, but have failed to convert the starts. Coach Paul Reifer too has called for the middle order to show some grit. Khary Pierre, who was named as replacement for the allrounder Fabian Allen, may get a shot for this match.

# Kuldeep Yadav is four wickets short of reaching 100 ODI wickets. If he picks up a four-wicket haul, he will be the fastest Indian to get to the feat.

“We need to take the game deep. The pitch was pretty good but the bowlers despite the humid conditions did well. The batters have to take the responsibility. They have been letting us down far too often.” Jason Holder 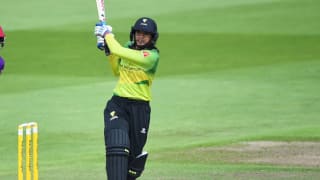