West Indies called up Jason Mohammed on Friday as replacement for the injured Andre Russell for this weekend's two T20 matches against India.

West Indies have called up Jason Mohammed on Friday as replacement for the injured Andre Russell for this weekend’s two T20 matches against India in the United States.

Mohammed, 32, has captained West Indies in both limited-overs formats and returns to the international fold for the first time since July 2018.

Russell had originally been selected despite continuing his recovery from a knee injury that saw him leave the World Cup early. He withdrew from the squad for the India series after experiencing discomfort while playing at the T20 tournament in Canada.

“We welcome Jason Mohammed into the squad for the first two T20 matches here in Florida. He is a player with lots of experience in all three formats,” said interim West Indies head coach Floyd Reifer. “It is not easy to the fill the shoes of someone like Andre Russell, who has dominated T20 cricket all over the world and helped West Indies win the ICC T20 World Cup on two occasions.

“We believe Jason is capable of good performances and we back him to perform at this level and win games as well.”

The first two T20s against India will take place on August 3 and 4 at the Broward County Stadium in Lauderhill, Florida, with the third to be held in Guyana. The two sides will also contest three ODIs and two Tests. 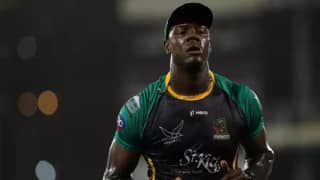