India's tour of West Indies which was to start immediately after the ICC World Cup has been reportedly postponed by two weeks on BCCI's request.

India‘s tour of West Indies which was to start immediately after the ICC World Cup has been reportedly postponed by two weeks on BCCI‘s request.

As per a report in the ESPNcricinfo, Cricket West Indies has accepted their Indian counterpart’s request to delay the start of the tour which will now likely start in the first week of August.

As per the ICC’s FTP, India were to play two Tests, three ODIs and three T20Is following the conclusion of the World Cup in United Kingdom, the final of which is on July 14.

BCCI has further asked CWI to include a three-day warm fixture during the tour as well. Ahead of the tour, India A are also scheduled to play three four-day matches in the Caribbean.

However, the dates for the fixtures are yet to be confirmed and as per the report, they will be finalised by May 13.

Owing to the rescheduling of the tour, CWI has also changed the itinerary of Caribbean Premier League (CPL). Earlier, it was to start from August 21 with the final slated for September 7.

In a media release, CWI CEO Johnny Grave confirmed that to avoid clash with the Indian team’s visit to the region and to ensure all Windies players are available for the CPL 2019, the dates for the annual T20 league have been changed.

The tournament will now be played from September 4 to October 12.

“We are pleased that we have been able to collaborate with CPL to find a spot in our international calendar to ensure that all the best Caribbean cricketers can take part, as the tournament plays a crucial role in our preparations and planning for the T20 World Cup in 2020,” Grave said in the media release. 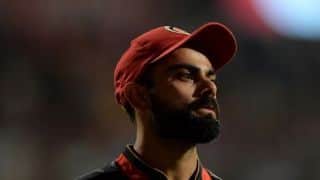