Umesh Yadav picked up a wicket while Ravindra Jadeja ran out Jason Mohammed.

Ishant Sharma grabbed two early wickets as India produced a disciplined bowling effort to reduce West Indies A to 79 for four at lunch on the second day of the three-day warm-up game here on Sunday.

Ishant was the peak of the bowlers as he claimed the wickets of opener Jeremy Solozano (9) and first-down Brandon King (4) in his first spell of five overs, while Umesh Yadav too found his rhythm early, dismissing Darren Bravo during his five overs giving away just seven runs.

Opener Kavem Hodge (45), who was dropped at slips in the third over, held on to one end but regular loss of wickets at the other end affected the hosts’ innings.

Hodge was five runs short of a half-century at the break and giving him company was Jonathan Carter (2). West Indies A still trail India 218 runs with six wickets in hand.

Earlier after a delayed start due to rain, India declared their first innings at the overnight score of 297 for five.

In reply, opener Solozano was the first to leave after his flat-footed drive found an edge and landed in the safe hands of KL Rahul as West Indies slipped to 16 for one in 4.2 overs.

King (4) was then dismissed in the ninth over when he played a loose drive only to be caught behind by Rishabh Pant as West Indies slipped to 30 for 2.

Bravo (11) then tried to stitch a partnership with Hodge but after adding 21 runs he edged an Umesh Yadav delivery to second slip with Rahul completing the formality.

In the 27th over, a direct throw from mid-on by Ravindra Jadeja ended the brief stint of Jason Mohammed (6) as West Indies A were reduced to 77 for four in 26.1 overs.

On the opening day, Cheteshwar Pujara struck form with a fine century while Rohit Sharma hit 68 as India shrugged off initial wobble to score 297 for 5.

Pujara and Rohit stitched 132 runs together for the fourth wicket to take India to a strong position after being reduced to 89 for 3 at lunch on Saturday.

Test specialist Pujara got going in his first competitive match of the West Indies tour as he retired after making 100 off 187 balls during which he struck eight fours and one six.

Rohit fell after making 68 off 115 balls. He hit eight fours and one six.

After Pujara retired in the final session, Pant and Hanuma Vihari pushed the Indian total further to reach near the 300-run mark.

Stumps were drawn just after Pant was out for a 53-ball 33 which he made with the help of four boundaries and one six.

Vihari was batting on 37 from 101 deliveries while Jadeja was on 1 when the stumps were drawn after playing 88.5 overs.

For West Indies A, pacer Jonathan Carter took 3 wickets for 39 runs from his 13.5 overs, while Keon Harding and Akim Frazer got one wicket apiece. 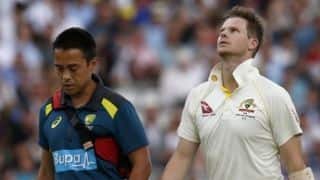 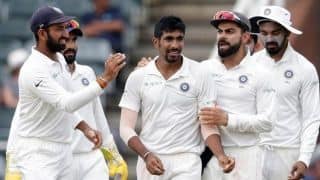