India captain Virat Kohli had added another feather to his illustrious hat of records during the second one-day international against West Indies at Queen’s Park Oval, Port of Spain in Trinidad on Sunday.

Kohli, who was just 19 runs shy from overtaking Pakistan great Javed Miandad as the highest run-scorer against West Indies in ODI cricket, went past his 26-year-old record as early as the fifth over bowled by Sheldon Cottrell, who struck early to remove Shikhar Dhawan for just 2. Miandad played his last ODI against West Indies in 1993.

Meanwhile, in the preceding Twenty20 International series, Kohli was India’s highest scorer with 106 runs under his belt. He was the second highest run-scorer in the series overall behind Kieron Pollard who scored 115 runs. India won the series 3-0.

Against all opposition he has faced in the 50-over format, Kohli’s average and strike rate after second-best against Windies. Moreover, his innings per fifty-plus score ratios of 1.94 is also second-best after 1.92 against New Zealand.

Kohli did not get to bat in the rain-affected first ODI of the series as West Indies had batted first and only 13 overs could be bowled before rain in Providence ensured that the match was washed out.

Most runs in ODIs against West Indies 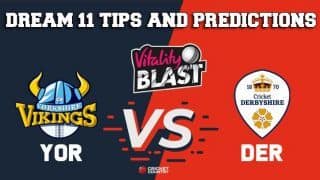