India will be aiming for wrap up the series, while hosts West Indies will have to do much much better with the bat to stay alive in the T20I series.

In what was a very tricky pitch to bat on at the Central Broward Regional Park Stadium Turf Ground, Lauderhill, Florida in the 1st T20I, India started their tour with a win courtesy their bowlers, led by the debutant Navdeep Saini. And, heading in to their 2nd T20I, only a day after their the 1st one, India will be aiming for wrap up the series, while hosts West Indies will have to do much much better with the bat to stay alive in the T20I series.

WI Skipper Carlos Brathwaite was critical of his batsmen, who managed to put up only 95/9 in 20 overs, but the trying conditions meant, they were in business even while defending the paltry total. India had to struggle before overcoming the target with four wickets in hand and 16 balls to spare.

The rain had affected the pitch conditions and with persistent rain and thunderstorms expected on Sunday as well, one can expect another tough day out for the batsman.

Weather: A high of 31 degree with showers and thunderstorm expected

India handed out debut to Saini and they were rewarded with a probing spell of 3/17 and but they would have been disappointed with Shikhar Dhawan, who was playing his first game back after the finger injury that ruled him out of the World Cup 2019. It is unlikely that India will change their combination as they look to wrap the series. The bowlers did their part well and all eyes would be on Rishabh Pant and Dhawan to get back in the thick of things. ALSO READ: Navdeep Saini’s consistency was the key to his impressive international debut: Bhuvneshwar Kumar

WI started off on the wrong foot, but one cannot rule out the reigning T20 Champions. They will be out all guns blazing to stay alive in the series and even though the openers went without scoring and it was only left for the veteran Kieron Pollard to pick up the pieces and rebuild, we cannot expect changes for the 2nd T20I. Plus WI have announced the squad for the first two T20Is, meaning there will be changes for the final one, so WI are most likely got with the same XI as the 1st T20I, barring an forced change.

Rohit, who has hit 104 sixes in 95 T20Is till now, is just two short of eclipsing the record for maximum sixes in the shortest format, currently held by West Indies batsman Chris Gayle

Evin Lewis has two T20I centuries against India, one of which came at this very ground in 2016 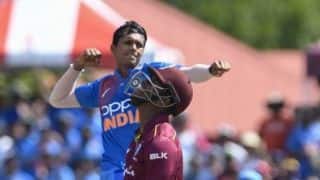 Navdeep Saini’s consistency was the key to his impressive international debut: Bhuvneshwar Kumar 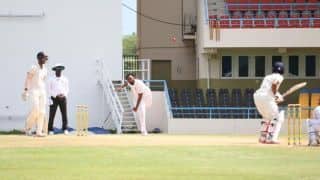