Bumrah joins medium pacer Irfan Pathan and spinner Harbhajan Singh as the only Indian cricketers to have taken Test hat-tricks. Bravo was caught by KL Rahul at second slip, and Brooks was given out leg before wicket with India successfully reviewing.

The hat-trick arrived with India calling another correct review. Chase was given not out but Kohli was convinced the ball was straight enough to hit the stumps. The ball tracker showed three reds before Bumrah and India erupted in joy. West Indies, at that stage were reeling at 13/4, in reply to India s strong total of 416.

Harbhajan was the first Indian bowler to the landmark, when he dismissed Ricky Ponting, Adam Gilchrist and Shane Warne at Eden Gardens during the famous 2001 Border-Gavaskar Trophy. Five years later, Pathan, bowling the first over of a Test match in Karachi, took out Salman Butt, Younis Khan and Mohammad Yousuf.

Bumrah went on to take a five-wicket haul, his fifth in Tests, and the second in two innings. In the previous game in Antigua, Bumrah rattled the West Indies’ second innings finishing with astonishing figures of 5/7 as India picked up the win by 318 runs.

Overall, Jasprit’s hat-trick was the 44th in Test cricket, and the first since Moeen Ali’s against South Africa 2017. 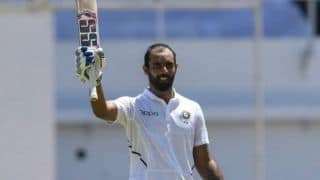