Mohammed Shami on Saturday picked up his 150th wicket on Test cricket, becoming the third-quickest Indian fast bowler to the landmark. Early into the morning session on Day 3 of the 2nd Test between India and West Indies in Jamaica, Shami, playing his 42nd Test, bounced out overnight batsman Rahkeem Cornwall to reduce West Indies to 97/8.

Shami’s dismissal of Cornwall was his second of the innings. Bowling the fifth over of the day and 37th of the innings, Shami sent down a snorter, squaring up the big man Cornwall, who was in no position to get underneath it and gloved it to Ajinkya Rahane, who completed the easiest of catches.

The two bowlers ahead of Shami are Kapil Dev and Javagal Srinath. Kapil, India’s World Cup winning captain in 1983 took 39 matches to get to 150 Test wicket. Srinath, who turned 50 on Saturday, took a game more than Kapil. Shami overtook Zaheer Khan, who needed 49 Tests, and below him is Ishant Sharma (54 Tests).

Earlier this year, Shami became the fastest Indian bowler to 100 ODI wickets – in 56 matches. Shami did so against New Zealand when he removed opener Martin Guptill in his first over during the 1st ODI between India and New Zealand in Napier. He did so by overtaking Irfan Pathan’s then-record of 59 ODIs. 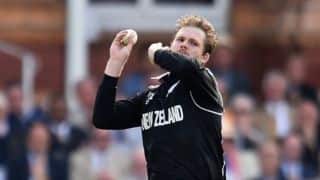