India, put to bat on a hard Jamaica deck, took lunch with their score reading 72/2.

Rahkeem Cornwall made his Test debut even special by getting his maiden wicket in the form of Cheteshwar Pujara as India, put to bat on a hard Jamaica deck, took lunch with their score reading 72/2. With patches of grass, Jason Holder had no second thoughts about fielding in a bid to repeat produce to repeat of Antigua, and even although it wasn t as rewarding as the first spell, West Indies did not make life easy for India s top order.

KL Rahul struck a couple of handsome boundaries in the first over from Kemar Roach and Mayank Agarwal did the same to Shannon Gabriel, but barring these two overs, West Indies kept it tight. Gabriel and Roach explored the hard bounce and with the ball moving viciously off the surface, India s openers were dealt a tough time.

Holder brought himself and started with a wicket maiden Rahul squared up with a good length delivery and edging for Cornwall to take his first Test catch, at first slip. The stand between Pujara and Agarwal crawled India scored 14 in the next ten over before Cornwall had his moment under the sun. The big guy bowled slightly off and Pujara, rocking on the backfoot chopped to Shamarath brooks at backward point.

Cornwall almost had another huge wicket when West Indies reviewed an LBW appeal against Virat Kohli. The ball drifted, pitched and rapped Kohli on the front foot, but the ball turned enough to miss the leg stump by quite some margin. Like Pujara, Kohli was kept from scoring freely with Cornwall and Roston Chase settling into a nice rhythm.

Yet, if India reached the score, it was due to Agarwal growing in confidence. It took him almost 10 overs to score his third boundary a juicy half-volley from Cornwall down the ground. It was followed by an attractive off drive through mid-off off Holder. Next up, Cornwall dropped it short and it was cut through backward point. 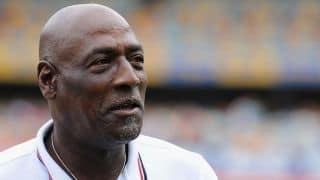