Virat Kohli scored a brilliant century, his 43rd in ODIs, as India beat West Indies by six wickets in a rain-truncated affair to win series 2-0.

Virat Kohli peeled off yet another century, his 43rd in ODI cricket, to lead India‘s rather comfortable six-wicket win, via DLS method, over West Indies in the third and final ODI in Port of Spain on Wednesday. The win also meant India sealed the three-match series 2-0 after the opening match was washed out due to rain.

Kohli, dropped on 11, ended up punishing West Indies with an unbeaten 114 leading a chase of 255, a revised target after a nearly three-hour long rain-break resulted in the contest being reduced to 35-overs per side. He was well supported by Shreyas Iyer, whose sizzling 65 off 41 in a century stand with captain Kohli put India on course after they were jolted early in a tall chase.

Chris Gayle‘s 41-ball 72 and Evin Lewis’ 43 off 29 set the base for West Indies after they opted to bat in the series-decider before rain halted their momentum. India came back strongly after the early pasting with West Indies finishing on 240/7. Needing to score at almost 7.3 runs per over, openers Rohit Sharma and Shikhar Dhawan started brightly before a mix-up gave the hosts an early breakthrough in the third over.

Dhawan’s refusal to take a quick single with Rohit already halfway down the track resulted in the latter being run-out on 10. West Indies then could have landed a body blow had wicketkeeper Shai Hope not dropped Kohli who edged one off Keemo Paul in the sixth over. He punished them with two fours in the following over. The pitch, a belter, didn’t have much to offer for the bowlers and stayed the same throughout the match despite a lengthy rain spell. And letting go of such chances was going to hurt West Indies dearly.

With Dhawan, Kohli added 67 runs for the second wicket to settle the jitters that had set in. Allen, with his left-arm darts, then brought Windies back into the contest removing Dhawan (36) and Rishabh Pant (0) in the space of three deliveries.

But Iyer was in sublime touch as he recorded a second successive fifty.  His innings included three fours and five sixes – with a lofted straight drive over the bowler’s head being a standout shot.

Kohli and Iyer added 120 runs between them for the fourth wicket to all but end West Indies’ hopes of a comeback as India overhauled the target in 32.3 overs.

Before Indian batsmen took over, Gayle put on a show with a flurry of fours and sixes. Alongside fellow opener Evin Lewis, he pummelled Indian attack to all parts of the ground.

With an opening stand worth 114, the foundation was laid. But with two new batsmen in Shimron Hetmyer and Shai Hope, Indian bowlers saw an opportunity. Spinners were introduced who slowed down the proceedings a bit. And then along came the rain with West Indies 158/2 in 22 overs.

West Indies then scored 82 from their remaining 13 overs thanks to a 16-ball 30 from Nicholas Pooran after the pair of Hetmyer (25 off 32) and Hope (24 off 52) struggled to push the scoring rate on resumption. Khaleel was expensive leaking 68 runs but also picked up three wickets, the most for India. 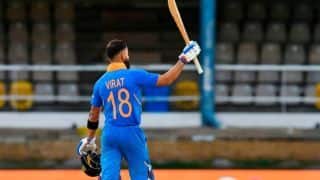