Devika Vaidya supported Veda Krishnamurthy well from the other end, scoring 32 runs herself.

After the top-order collapses early, Indian middle-order batter Veda Krishnamurthy plays a crucial knock of 71 runs as the hosts put up 199 for 6 in the third One-Day International (ODI) against West Indies Women. The match is being played at Gokaraju Liala Gangaaraju ACA Cricket Ground, Mulapadu. India Women did not have the perfect start losing opener Smriti Mandhana early on. Wickets kept falling in regular intervals as the top-order, including the captain, failed to perform with the bat. But it was Veda who emerged as the saviour, playing a commendable innings to take his side to a good total. LIVE CRICKET UPDATES: India Women vs West Indies Women, third ODI at Vijaywada

West Indies women won the toss and sent the Indian Eves to bat first. Smriti Mandhana and Deepti Sharma were sent to open India’s batting. India lost their first wicket in the second over of the match as Smriti edged a Deandra Dottin delivery for Stafanie Taylor to catch. Deepri, along with skipper Mithali Raj, tried to build up a partnership but it was a brief one. Mithali, who has been the star performer for India in the series so far, could not repeat her heroics and fell for 15. It was Chedean Nation, who removed Mithali as Anisa Mohammed took the catch. Deepti Sharma also departed soon after for 23 runs and India were left reeling at 52 for 3 in 21 overs.

Another disappoinment was Harmanpreet Kaur’s innings. The flamboyant middle-order batter was not in her usual form throughout the series and it continued in the last match as she could not contribute more than 19 runs, getting out lbw off a Stafanie Taylor delivery.

The next in was the star of the show, Veda Krishnamurthy. A very matured innings came from her, as she took time to settle down and gradually open up, hitting boundaries afterwards. Her innings created pressure on the visitors’ bowlers and she took India forward, smoothly getting to her 50. Devika Vaidya supported her well from the other end, letting Veda take the maximum strikes while rotating the strike kept on adding runs to the scoreboard.

Veda’s brilliant innings came to an end as she got bowled off a Chedean delivery. But she had done her job by the time she departed, scoring 71 off 79 balls and taking India to 160. West Indies in the series have not scored more than 153 runs and Veda ensured India went past that mark to create a psychological pressure upon the visitors.

Devika played her natural game as Veda departed. With 5 overs to go and Jhulan Goswami at the other end, she tried sneaking as many quick singles or doubles she could while kept seeking boundaries. Jhulan, who is known for hard-hitting down the order. also helped her side with boundaries as India put up

With the ball, Deandra Dottin was effective as she gave West Indies their first breakthrough. Chedean Nation was the most successful with 2 wickets while Anisa Mohammed and Shakera Selman bagged one wicket each. 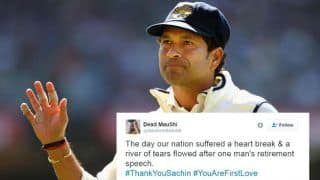