India and the West Indies will take on each other in their ICC Cricket World Cup 2015 clash at the WACA.

Perth: India and the West Indies will take on each other in their ICC Cricket World Cup 2015 clash at the WACA, Perth on Friday. India are at the top of the table in Group B with three wins from as many matches. On the other hand, West Indies are looking to improve their standing after two victories in four games. This could be a crucial game for the standings in the group, with India looking good at the top and West Indies trying to work their way up. SCORECARD: India vs West Indies ICC Cricket World Cup 2015 match 28 at WACA, Perth

The wicket at the WACA had played well in the two games so far and has had runs on offer. It is said that there may be a little more bounce on offer for this game. Some of the fast bowlers will be in play. India will wait on Mohammed Shami’s fitness. He did bowl in full tilt during the net session on the eve of the game and it was said that he was expected to be ready for the game. If he comes in, Bhuvneshwar Kumar will make way. Mohit Sharma and Umesh Yadav will hold on to their spots. Lesson from Virat Kohli spat: Talk more, not less with media

On the West Indian side of things, Jason Holder will be one of the key players as his height will help him purchase the bounce on this surface. The captain will also want to improve upon his performance from the last game and help his side do well. Jerome Taylor will be the other main fast bowler, with Andre Russell being the all-rounder. There could be a chance of a Kemar Roach coming in, but Holder said they will only decide on the playing eleven tomorrow. Virat Kohli misses press conference after controversy involving Indian cricket

But, the main focus would be on the batsmen, with some big hitters and game-changers on both sides. There is a certain Chris Gayle, whose presence is always a threat. Gayle has had some back-injury problems but will continue to hold the key for the West Indies. Looking at the West Indies team, one feels they have the batting right through. The likes of Marlon Samuels, Denesh Ramdin, Russell and Darren Sammy make up an explosive middle order. Chris Gayle in spotlight ahead of India vs West Indies ICC Cricket World Cup 2015 match

India have Rohit Sharma, Shikhar Dhawan and Virat Kohli in the top order, who have been in good form. There is also Ajinkya Rahane, who had a great outing against South Africa. Suresh Raina and MS Dhoni will form the punch in the middle-order. India in ICC Cricket World Cup 2015: The attacking practice ritual

One would say that there is a lot of familiarity between the two sides as they have played each other quite a lot. Also, the fact that they share the dressing rooms in the Indian Premier League (IPL) means that the teams are well-versed with each other’s strengths and weaknesses. Back home in India, the festival of colours, Holi would be celebrated. Sammy, quite jovially said, India can celebrate holi but West Indies would want to celebrate a win. For that to happen, West Indies have to get their act together. India are the favourites, but one never knows with the West Indies.

Ravichandran Ashwin: We like to treat every game like it's a knockout game so that it propels us in a good state 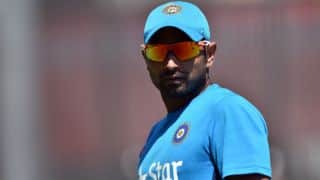