India’s bowling spearhead Jasprit Bumrah reached the milestone of 50 wickets in Test cricket on Friday, getting there in his 11th match.

This makes Bumrah, 25, the joint third-fastest Indian bowler to do so, drawing level with Narendra Hirwani and Harbhajan Singh.

On day two of the first Test match between India and West Indies at North Sound, Bumrah dismissed Darren Bravo lbw for 18 for his 50th wicket. West Indies ended the day on 189/8 in reply to India’s total of 297.

R Ashwin – controversially omitted for the ongoing first Test against West Indies in Antigua – is the fastest Indian to 50 Test wickets, getting there in his ninth match. Anil Kumble, India’s highest wicket-taker in Test cricket, got his 50th in his tenth match.

Former India legspinner turned national selector Hirwani claimed his 50th Test wicket in his 11th appearance, against England at Lord’s in 1990. Harbhajan managed it versus Australia in Chennai in 2001.

(READ: In Jasprit Bumrah, India have a diamond in their armoury: Viv Richards)

Ashwin reached 50 wickets in his ninth Test, getting to the landmark in November 2012 against England in Ahmedabad. Kumble did it against Zimbabwe at the Feroz Shah Kotla in 1993.

After bursting onto the international scene during the 2016 ICC World T20, Bumrah broke into the Indian Test team in their opening match of 2018, and ended up as the fourth highest wicket-taker of the year with 48 at 21.02. His maiden five-wicket haul at the Wanderers was match-winning; his nine-wicket match haul at the MCG series clinching, and India felt his absence in England where he was injured for the first two Tests that India lost. 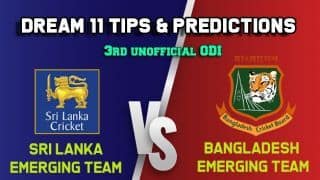