India vs West Indies: KL Rahul bitterly disappointed at throwing away another start

India vs West Indies: KL Rahul bitterly disappointed at throwing away another start

The opener fell to Roston Chase both times during the Antigua Test, after getting starts.

India‘s grip on the first Test against West Indies in Antigua has been tightened after the tourists extended their lead to 260 with seven wickets in hand by the close of play on Saturday, but one man knows that he should have been batting at stumps.

KL Rahul scored 38 off 85 balls before he was bowled by the offspinner Roston Chase in an all-advised sweep shot, in which he exposed all three stumps in an attempt to paddle the ball around the corner.

In India’s first innings, Rahul had got to 44 from 97 balls and was dismissed when getting a thin edge on a glance down the pads of Chase.

These two dismissals to Chase at North Sound mean that of his 58 innings in Test cricket, 20 have been between 10 and 49. Speaking to reporters at the end of day three, Rahul admitted he was bitterly frustrated at two aborted starts.

“I’ve been batting well, I’ve looked comfortable in both the innings, my head space and everything is very good. I’m happy about a lot of things, just if I can keep my patience and keep batting the way I do in the first 60-80 balls, if I continue to do that for 200-250 balls then it’ll obviously benefit me and the team. That’s what I’ll look to do next match.”

Eight months ago when India last played Test cricket, Rahul batted five times in Australia and scored 57 runs, of which 44 came in one innings. Around that knock which promised so much more, he made 2, 2, 0 and 9.

With some World Cup runs to his name, Rahul was named as opener alongside Mayank Agarwal for the first Test against West Indies despite a Test batting average of just over 23 since the start of 2018.

Asked whether his problems were technical, Rahul dismissed such notions and said it was a matter of confidence.

“Technique and everything is over-rated – when you get runs everything looks good,” he said. “So it was important for me to spend time in the middle, I never felt that there was anything drastically wrong with my technique in Australia. It was just one of those phases that every batsman goes through.

“When you are in that phase it’s challenging to get out but a great player will find his way out. That’s why going out and playing some practice games, India A games and getting some runs under my belt did well for my confidence and I could go back and focus on getting runs more than why I was getting out and trying to dissect my technique or batting.”

But what of getting out to Chase twice in both Test, the second when walking right across his stumps? A lapse of concentration?

“Sometimes when you play a sweep or a paddle sweep there is a certain percentage of premeditation in it,” reasoned Rahul as he said it was an attempt to dominate Chase. “You have played the offspinner for a bit, five or six overs, and I knew the lines that he was bowling, he was outside off. I was thinking boundary and not thinking about getting lbw or anything. I was thinking about runs. Since I had hit him for a boundary before that ball I knew he would try to bowl a better length which is easier for me to paddle. But unfortunately I didn’t execute the shot really well. 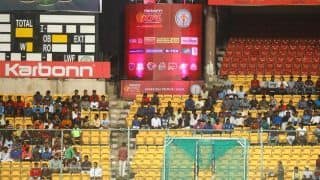