Prasad on his part said that the team was looking at Pant across all formats and that it was on Dhoni to decide when he wishes to retire.

Chief selectors MSK Prasad started Sunday’s press conference with great gusto after picking the Indian squads for the Windies tour. Not only did he say that he would clear all doubts about the strange replacement pattern during the ICC Cricket World Cup 2019, but also added that he would clear the air over MS Dhoni‘s position.

While he started on the lines that Rishabh Pant is being groomed with an eye on the 2020 World T20, what he did not reveal was how the team management has requested Dhoni not to retire at the moment.

Sources in the know of developments said that while Pant is being readied with an eye on the 2020 World T20, the team management doesn’t wish for Dhoni to hang his boots as that could create a sudden vacuum in the set-up which will be hard to fill if Pant suffers an injury by any chance going into the next showpiece event.

“Dhoni knows what his role and position is. All these talks about his retirement and when he will call it quits makes no sense as he is a team player. He will never react to any controversy and I am sure you all know this much about the man and his ethics. (ALSO READ: India’s T20I squad an indication of 2020 T20 World Cup planning)

“While the team management is grooming Pant with an eye on the next T20 World Cup and beyond, they want Dhoni as a mentor and back-up if he is needed going into the tournament. They want him to stick around a bit longer.

“Take a look around and tell me who are your options if Pant suffers an injury? To be honest, all the names on the other side don’t match-up to be half as good as Dhoni still is. Yes, there is no denying the fact that Pant is the future and he will be looked at across all formats, but Dhoni’s guidance as well as presence is still needed,” the source explained.

Prasad on his part said that the team was looking at Pant across all formats and that it was on Dhoni to decide when he wishes to retire. “Retirement is purely individual. A legendary cricketer like Dhoni…he knows when to retire. But as far as the future roadmap is considered, that is in the hands of the selectors. He (Dhoni) is unavailable for this series. Having said that, we had certain roadmaps till the World Cup. Subsequently, post the World Cup, we have laid down few more plans.

“We thought of giving as many opportunities to Rishabh Pant to see he is groomed. That’s our plan right now. Pant hasn’t done anything wrong for his non-inclusion in the playing XI. Pant will be playing all the three formats so we will have to look about his workload management,” he said. (ALSO READ: Who decided on the fitness criteria? BCCI official questions MSK Prasad’s stance over Ambati Rayudu)

When asked why Prasad made such a comment if it was indeed a team management decision to ask Dhoni to hang around a little longer, the source declined to get into that but said that there seems to be more than what meets the eye when it comes to his handling of questions on Dhoni.

“Even earlier he had made a public statement about Dhoni that was different from what he had stated in private on the day of a selection meeting. He had said that MS had wanted rest and in public he said that the selectors were looking for more options,” the source added. 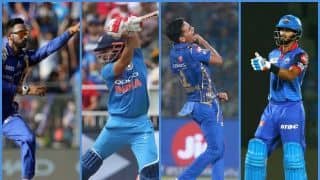 Have started working on developing the best cricket team of the world: Pakistan PM Imran Khan