West Indies ended first session on Day 1 of Final Test against India at 68 for 2 at Port of Spain in Trinidad.

While India’s Test skipper Virat Kohli and coach Anil Kumble are making use of the off time they are receiving, thanks to the persistent rains, Rohit Sharma seems to be on another tangent. Kohli and Kumble recently visited West Indies legend Sir Garry Sobers, with rains washing out the game on Day Two and Three. Meanwhile, Rohit is enjoying the weather at the Caribbean Islands and has found a better way to enjoy workout. Rohit mixed up workout with paddle boarding in the Island. Rohit entered the Test series against West Indies from third Test and proved to be ineffective with runs. He scored 9 and 41 respectively on the series. He was in for a calm and composed batsman Cheteshwar Pujara. Full Cricket Scorecard: India vs West Indies, 4th Test match

Kohli has once again entrusted the responsibility on Rohit for the final Test and has gone ahead with an extra batsmen including Murali Vijay and Pujara in the final one. This will be the only moment for Rohit to show his talent with the bat with plethora of Test series lined up for India in the coming months. ALSO READ: Virat Kohli relishes meeting Sir Garry Sobers

As for the final Test, the match is leading to a draw. On Day One, West Indies won the toss and elected to bat. They immediately lost two wickets in the form of Darren Bravo and Lean Johnson picked by Ishant Sharma and Ravichandran Ashwin. Unfortunately, Day Two and Three were washed out due to wet outfield. India who are at No. 1 spot at the moment in Test rankings, can come to second spot and Pakistan will find their way at top for first time if the match ends in draw. 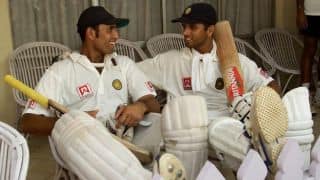