India will look to get their act together and perform better in the second ODI.

After a thrilling game in the first One-Day International (ODI), India and Zimbabwe lock horns in the second match at Harare. India won the first game by just four runs despite an unbeaten century from skipper Elton Chigumbura could not help the hosts register a win.

There were positives for India to take from the match. Ambati Rayudu scored a scintillating century and stitched an excellent 160-run stand with all-rounder Stuart Binny (77) to help India post 255, in spite being 87 for 5 at one stage. READ: Ambati Rayudu’s ton against Zimbabwe shows he can fit into the full strength Indian team

Skipper Ajinkya Rahane opened the innings for the visitors and he managed to get off to a start, but could not convert it. The middle-order consisting of Manjoj Tiwary, Kedar Jhadav and Robin Uthappa too failed miserably and they will look to put on a better show in the second ODI, if given a chance. Murali Vijay opened the innings with Rahane, but was dismissed cheaply.

As far as the bowling is concerned, Akshar Patel was at his best finishing with figures of 2 for 41 in his quota of 10 overs. Binny too chipped in with a couple of wickets. Bhuvneshwar Kumar was entrusted to bowl the final over, with Zimbabwe still needing 10 to win and he conceded just 5. READ: Bhuvneshwar Kumar: India’s unsung hero

India can afford to make a couple of changes. They can give a debit to Sandeep Sharma, instead of persisting with Dhawal Kulkarni, who looked a bit out of sorts in the first ODI.  Manish Pandey too can be given a look in, in place of Murali Vijay, with Uthappa opening the batting. Uthappa said a few days back that opening comes naturally to him. Seeing the amount of runs he has scored in that position in the domestic circuit and also in the Indian Premier League (IPL), it won’t be the worst of ideas to give him an opening slot. Pandey can fit perfectly in the middle-order.

Chamu Chibhabha bowled a magnificent spell, picking up two wickets and picking up 2 wickets in his 10 overs. Graeme Cremer too bowled well, but like India, their depth bowling certainly has to improve. Their strength lies in their batting, which clearly showed. Another disciplined bowling effort could see them register a win in the second ODI and set up the series beautifully going into the third ODI.

Chigumbura batted out of his skin, but he did not any good support from the top order. It was his 86-run stand with Cremer for the seventh wicket that got Zimbabwe back in the game, but it was too late by then as India finished things of clinically. READ: India tour of Zimbabwe 2015: Rahane, Harbhajan and other Indian cricketers to watch out

Zimbabwe have Malcom Waller in their squad, who can be a handy batsman at the top order, but they can also add Neville Madziva to their bowling line-up to give it a bit of a boost. But it is unlikely that they will make any changes in the second ODI, especially after coming so close to tasting victory.

Zimbabwe will be looking to bounce back after their narrow loss in the first ODI and it will be extremely foolish from India’s point of view to take the hosts lightly in the second ODI. The close finish in the first ODI is perhaps the wake up call that India needed. 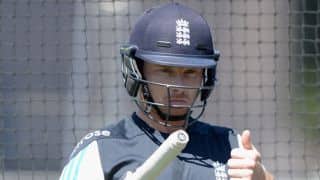