India will like to repeat their performance from the second T20I to clinch the series and wrap up the tour.

India are set to clash against Zimbabwe in the 3rd Twenty20 International (T20Is) at Harare Sports Club, Harare. After being comprehensively beaten in the One-Day International (ODIs) series, Zimbabwe came back strong against India in the T20I series opener as they posted a healthy total on board and defended it in the last over to win the match by 2 runs. The next match was a forgettable affair for the hosts as they fell flat to an all-round performance by Team India. Online streaming of the India-Zimbabwe T20I will be available on Ten Sports Network. The Ten Sports Network has the telecast rights of the ongoing India versus Zimbabwe series, and is telecasting the games on TEN 1 HD, TEN 2 and TEN 3.while the live updates of the match will be available here. India would like to wrap up the series as well as the tour in a winning fashion by clinching the T20Is series as well. FULL CRICKET SCORECARD: India  vs  Zimbabwe , 3rd T20I Match at Harare

In the previous game, leaving the toss, nothing went right for the hosts as they failed to carry the momentum forward form their first match. They posted a paltry total as the Indian bowlers were all over them and restricted them to 99 for 9 in 20 overs. Peter Moor was the only batsman from the home side who looked in little ease while batting as compared to his teammates. Elton Chigumbura, in particular, looked completely out of sorts after his match winning knock against the visitors in the first T20I. LIVE CRICKET BLOG: India vs Zimbabwe, 3rd T20I Match at Harare

For India, they would like to stick to the same XI until and unless anyone gets injured. MS Dhoni would like to have the last laugh in the tour as he would get a chance to represent India after a few months with India assigned to play Test matches against West Indies in July. This will also be Dhoni’s 324th international match as captain for his side, across all formats (joint most for any with Ricky Ponting) and he would like to make a mark with his willow and captaincy in this match. 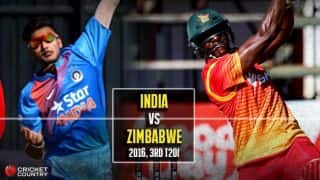