India are considering an unusual four-pronged pace attack for the third Test against Australia but won't settle on their final line-up until just before the match, said captain MS Dhoni. 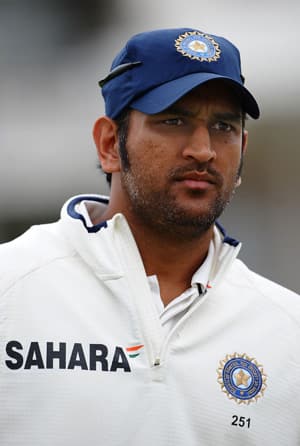 India are considering an unusual four-pronged pace attack for the third Test against Australia but won’t settle on their final line-up until just before the match, said captain MS Dhoni.

A grassy pitch has greeted the Indians at Perth’s WACA Ground, with curator Cam Sutherland predicting the wicket would have more pace and bounce than the corresponding Test against England last year, when seam bowlers dominated and just two of 40 wickets fell to spin.

Down 2-0 in the four-Test series after losing by 122 runs at the MCG and being thrashed by an innings and 68 runs in Sydney, India are already certain to lose second spot in the ICC Test rankings, but Dhoni said they were desperate to avoid a repeat of last year’s 4-0 whitewash in England.

Their desperation has them considering the unusual move of playing four pacemen and Dhoni, who normally doesn’t take great stock in pitch conditions, said they would reserve their final decision until they inspect the strip just before the match, which starts Friday.

“A lot depends on how it looks before the start of the game,” Dhoni said of the pitch, hinting that spinner Ravi Ashwin could miss the match.

“It will affect us to some extent, especially in the bowling department. We have to see how much grass is taken off and how much rolling is done and how hard the wicket is. We have to see whether the spinner will get some kind of assistance or not,” he said.

“Our bowling will be structured depending on the wicket.”

Sutherland said recent hot weather meant the pitch probably wouldn’t be as lively as the Indians feared when they arrived, and added that he expected a spinner to gain considerable bounce and some turn.

If India go for an all-pace attack, the obvious replacement for Ashwin is 27-year-old medium-pacer Vinay Kumar, who would be making his Test debut, but has played 15 one-day internationals.

Unfortunately for India, Ashwin has been their second most productive batsman in the series, his 143 runs at 35.75 behind only Sachin Tendulkar.

Dhoni, who said he would consider his own playing future at the end of 2013, again dismissed talk of a rift in the Indian side as purely media speculation.

“I have never seen the Indian team fight,” he said.

He also said he had instructed his players to ignore taunts from the crowd, with paceman Ishant Sharma photographed giving a one-finger gesture to a local this week, and Virat Kohli fined half his match fee for a similar reaction during the second Test in Sydney.

Dhoni said this series had a completely different feel to the ill-fated tour of England, admitting his team failed to apply themselves against the English.

Dhoni said India were determined to go down fighting against Australia.

“You die, you die, you don’t see as to which is the better way to die. We want to get back in the series, in England we weren’t really there and we didn’t perform to the potential we have. We have learnt a lot from that series and have learnt a lot from this series also. There are two Test matches to go, so we are hoping for the best,” he said. (AFP)