The Indian Women snatched victory from the jaws of defeat during the 1st One-Day International (ODI) at Bangalore against New Zealand women. They scored a mere 142 in the first innings but successfully defended the score in a low scoring thriller. They won the match by 17 runs in the end. LIVE UPDATES: India Women vs New Zealand Women 1st ODI at Bangalore

India’s defense of 142 was always going to be a tough ask but right from the first over they made the Kiwi batters work hard for their runs. The bowling was opened by all rounder Jhulan Goswami along with Ekta Bisht. They kept it tight and allowed the New Zealanders to score just five runs of the first five overs.

While opener Suzie Bates was handling the pressure quite well and rotating the strike every now and then, Rachel Priest failed to do so and fell for a 19-ball duck in the 6th over. Thereafter, wickets came by at regular intervals and New Zealand were kept under check.

Bates continued to bat sensibly even as Amy Satterthwaite and Kate Broadmore lost their wickets for small scores. Bates couldn’t go on for much longer however and fell for 28 runs to the spin of Rajeshwari Gayakwad. Wickets were in no short supply thereafter and the match was in the balance for pretty much the entire innings.

After Bates, it was Sophie Devine who held the innings together with 24 runs before throwing her wicket away to Harmanpreet Kaur at a crucial stage. That wicket put India on top and further loss of wickets didn’t help the cause for the visitors. Leigh Kasperek, a debutant, held her nerve till the end but did not receive the support from the other end. The final wicket fell on 125 with her stranded on 21 not out, giving India an inspiring victory.

In the first innings, the New Zealand bowlers were just as effective and struck at regular intervals. Had it not been for Jhulan’s gutsy 57, India’s innings would have probably wrapped up at less than 100. While most wickets were result of great fine bowling, the Indian batters were also guilty of throwing away a few wickets to juicy full tosses.

For the New Zealanders Lea Tahuhu, Morna Nielsen and Leigh Kasperek were the most effective bowlers, taking three wickets a piece. They struck frequently, not letting Indians to settle down into a partnership. 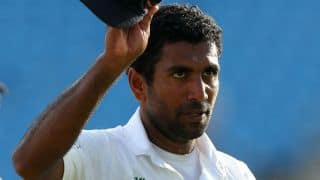