Riveting day of Test cricket! Nagarajan Niranjana is the performer of the day for India Women, first capturing four wickets with the ball, and then scoring an invaluable unbeaten 13 to ensure that the visitors hold the advantage at Stumps on Day One of the only Test against England Women at Wormsley. You can read the report on all the action of the day here.

This is Shiamak Unwalla signing out! I hope you enjoyed the action as much as I enjoyed reporting it. Have a good night!

And so India end the day just five runs behind England. Wonderful fightback from the pair of Jhulan Goswami and Nagarajan Niranjana here! These two have clawed back the advantage that nearly slipped from India’s grasp thanks to some poor batting by the middle order.

This pair has really dug deep. They are keeping the English bowlers at bay and are ensuring that England do not snatch back the advantage. India have not scored a lot of runs in the last few overs, but they have guarded against a collapse. With the England bowlers tiring, India can really push on now.

This has been an excellent recovery from the Indian new-ball pair of Jhulan and Niranjana. These two have kept the England bowlers at bay for nearly 10 overs now. If they can continue in this vein, India should take the lead within the next few overs.

AND THAT’S THE END OF HARMANPREET! Just as she was starting to look dangerous, Jenny Gunn snaps her up. Things looking rather bleak for India at the moment. That was the last of the front-line batswomen.

ANOTHER ONE BITES THE DUST! This is all unravelling here for India. The bowlers put in a tremendous performance, but the batswomen are throwing it all away. Anya Shrubsole comes back on and strikes immediately, getting rid of Karu Jain for a six-ball duck.

OH BIG WICKET! HUGE WICKET! India’s backbone, Mithali Raj has been dismissed. Jenny Gunn has taken three for one now. She has been absolutely outstanding today. Move over, Niranjana, Jenny is the new sheriff in town!

AND ANOTHER ONE DISMISSED! That’s the end of a promising innings from Smriti Mandhana. Caught behind by Sarah Taylor off Jenny Gunn. Massive wicket for England.

AND THAT’S THE SECOND WICKET DOWN! Kate Cross has bowled consistently all day, and she is finally rewarded. Poonam Raut’s brief stay at the crease comes to and end.

Kate comes on again. And it’s a maiden over. Sonia continues. And that’s four to Smriti. Just a single there. Kate again. That’s four to Smriti. Here comes Jenny Gunn into the attack now. AND SHE STRIKES! In her very first over. Thirush caught by Sarah off Jenny. Huge breakthrough for England.

Sonia again. Just two off the first ball. Kate continues. It’s a maiden to Smriti. Sonia to bowl again. Three runs off that last over. And again Kate. She oversteps. Just the one extra off that over. Sonia again. She has bowled quite well so far, though without much success. And another maiden.

Here’s the debutant, Sonia Odedra. Just a single to start off with. Anya again. Just the one run. Sonia continues, that’s four runs off that over. Anya continues. Four leg-byes to end the over.

So it’s time for the final session of the day. Here comes India’s openers Thirush Kamini and Smriti Mandhana. Anya Shrubsole and Kate Cross open the bowling for England. Anya to Thirush. And it’s a maiden to start off. Kate to Smriti now, and it’s four off the first ball. Just a single to end the over. Shrubsole again. And it’s another maiden. Here comes Kate again. Couple of boundaries of the over! Great start for India. Shrubsole again. Another maiden.

And it’s all over now. Niranjana bowls the 42nd over, Kate goes for a run but is caught short of her ground, India Women have bowled out England Women for a paltry 92.

Niranjana continues. Maiden over. Bisht now. And another maiden. Niranjana again. That’s wide. And a single, so two runs off that over. Bisht continues. AND SHE BREAKS THROUGH! England now in serious danger of not reaching 100! Sonia Odedra departs LBW to Bisht.

Shikha Pandey comes back on for the first time after Lunch. Just a couple to Jenny Gunn to get away. Shubhalakshmi again. And it’s another maiden for her. Shubhalakshmi doing after lunch what Niranjana did before it. And speaking of Niranjana, here she is, bowling her first over after lunch. Gives three off that over. Bisht comes on again. Just two off the over.

Shubhalakshmi comes back again. OH AND SHE STRIKES AWAY! That’s the end of Sciver, cleaned up. AND ANOTHER ONE GONE! Things are unravelling quite fast for England. Anya Shrubsole out LBW first ball!

OUT! Natalie Sciver 9(26) b Shubhalakshmi Sharma

Shubhalakshmi Sharma now into the attack. And Natalie greets her with a couple of boundaries! Eight off that over. Jhulan again. Sarah looking quite good in the middle, that’s another boundary for her. Shubhalakshmi continues. And bowls a maiden.

Jhulan Goswami and Ekta Bisht start off after lunch. Jhulan starts with a maiden, but Taylor hits Bisht for a couple of boundaries to get away. Jhulan again to Sciver. Just the single off the over. Good start for England after lunch.

What a stunning performance from Niranjana. England are reeling on 49 with half their side back in the pavilion. No doubt, it was a good toss to win on this pitch. But there’s a long way to go and the Indian women have to keep up the pressure to gain an upper-hand in this Test.

India absolutely on a roll here. Niranjana comes on now. Just one off the over to Sarah Taylor. Shikha again. Single to Taylor. Oh that’s four to Lydia Greenway. And four more. Expensive over from Shikha. Niranjana now. Another single. This was her ninth over on the trot. Shikha continues. Four to Sarah. And again, four more! England are really targetting Shikha. Niranjana into her 10th over now. AND SHE HAS HER FOURTH! That’s the end of Lydia, she was looking good, but Niranjana is in red hot form!

OUT! Lydia Greenway 8(17) LBW b Niranjana

Shikha Pandey comes on now. That’s four to Beaumont. Niranjana continues. OH THIS IS A HUGE WICKET! Charlotte Edwards departs lbw to Niranjana. What a spell this has been from her. It’s a wicket maiden! Pandey again. OH ANOTHER ONE FALLS! This is unravelling very quickly for England.

Jhulan continues. Oops, that’s four byes. And three more to Beaumont off the last ball of the over. Niranjana again. Just a single off the third ball. OH AND SHE’S GOT ANOTHER! Lauren Winfield departs after braving the new ball. Niranjana induces the edge to wicketkeeper Jain, and Charlotte Edwards comes in now. Oh and that’s four to get off the mark.

Niranjana continues. And she finally concedes a single to Beaumont. Just a run off that over. Jhulan to continue. And this is the first boundary of the English innings. Four to Winfield. And another single off the last ball. England are really moving along this over. Five runs off it! Niranjana again. And a couple to start the over. Winfield starting to get set.

And play has resumed. Jhulan to continue. Leg-bye off the first ball, but she follows up with five dots in a row. Niranjana continues. And she bowls yet another maiden, that’s three in a row! England really struggling to find the runs now. Jhulan continues. Beaumont on strike. And almost another maiden, just a single off the final delivery. Very good bowling by the Indians so far.

India have struck, and Tammy Beaumont has come in at No 3.  The rains are coming down now, and unfortunately play has to be halted. We will be back soon with more updates.

So the match is finally underway! Here comes India’s spearhead Jhulan Goswami. This is a golden opportunity for the Indian women to showcase their skills. And Jhulan starts with a maiden. Nagarajan Niranjana to continue now. And it’s another maiden. Good start by the Indians. Here’s Jhulan again. Just a single off the over. Niranjana to bowl the fourth over of the innings. AND SHE STRIKES! England lose their first wicket, it’s the big gun Knight!

OUT! Heather Knight 1(14) LBW b Niranjana

India women have won the toss and will field first in the Kia Women’s Test #EngWomen pic.twitter.com/2poHuRWBbg

Here’s the pitch for the Kia Women’s Test @WormsleyCricket Toss in 10mins. What would Charlotte Edwards do? #WWCED pic.twitter.com/aQxQX0ZCdM

Hello and welcome to CricketCountry’s live blog of the only Test at Wormsley between India Women and England Women. I am Shiamak Unwalla and I will be bringing the live updates to you. India make their first visit to England since 2012 and this will be their first Test in eight years before they move on to the One-Day International series. A long gap means India will be playing a new side and only three players have the experience at this level. Jhulan Goswami, Mithali Raj and keeper Karuna Jain.

It won’t be an easy task for the three seniors to lead a side against a strong England set up who have been performing well in recent times. Led by Charlotte Edwards, the side boasts of impressive players like Sarah Taylor, Anya Shrubsole. They also retained the Ashes this year while their men’s team took the beating Down Under.

We’ll keep you updated about the toss and start of play. The match is scheduled to begin at 11am local time and 15:30 India time. Meanwhile you can read some of our special features ahead of the Test.

1. Five Indians to watch out for in this match

2. Five England players to watch out for in this match

3. Is the Test a consolation for one for India? 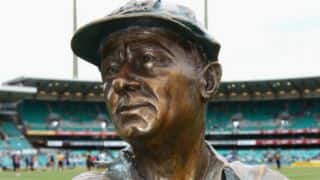