India Women take on Pakistan Women in Match 7 of the ICC Women’s World T20 2016 at Feroz Shah Kotla, Delhi. India Women got off to an excellent start in the series, having secured a thumping win over Bangladesh Women in their first match this tournament. Pakistan Women on the other hand were defeated by West Indies Women by four runs in their first match at Chennai. While the men’s match at Eden Gardens, Kolkata between India and Pakistan will take all the attention that day, a win for India Women in this match will set the tone. Full Scorecard: India Women vs India Women, ICC Women’s T20 World Cup 2016, Match 7 at Delhi

Mithali Raj was in excellent form in the opening match against Bangladesh, where she top-scored with 42. Vellaswamy Vanitha, Harmanpreet Kaur and Veda Krishnamurthy played key roles in the match as they steered India to a match-winning score. Their bowlers too backed up the performance of their batsmen, restricting Bangladesh Women for just 91.

Pakistan Women suffered a huge blow after they learnt that their star opening batsman Javeria Khan broke her thumb after a bouncer from West Indies Women fast bowler Shamilia Connell had struck her right thumb, which then ricocheted to her jaw, due to which she had to be stretchered out of the ground. She has therefore been ruled out of the tournament. Ayesha Zafar, who has played two T20 Internationals (T20Is) and one One-Day International (ODI) has been named her replacement. READ: India vs Pakistan, Women’s World T20 2016: Likely XI for hosts

Pakistan Women struggled to chase down a low target of 104 in their first match against West Indies Women at Chennai. They fell four runs short and will be hoping to put up a better show, especially with the bat in this match. Their bowlers, however did a fine job. Spinner Anam Amin led from the front as she finished with 4 for 16 in her four overs.

A win for India Women will ensure that they get closer to sealing a semi-final berth. If Pakistan Women lose this match, it will make it that much difficult from them to make it to the knockout stages. 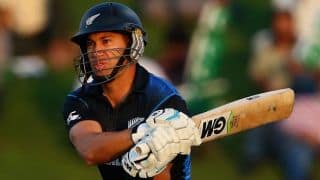