India World Cup squad announcement: Pant vs Karthik, Rayudu at No. 4 and other areas of concerns before se

Who between the two finally seals the second wicket-keeper's spot is likely to be the most discussed topic during the meeting on Monday.

The five wise men of Indian cricket, led by MSK Prasad, will meet in Mumbai on Monday to pick the squad for the 2019 World Cup in England. While most of the players pick themselves, thanks to their consistent show in recent times, there are three main areas of concern that the selectors need to take a call on when they sit down to pick the 15-member squad.

The much-debated number four slot, whether Rishabh Pant or Dinesh Karthik go as the second wicket-keeper behind MS Dhoni and finally, if the team will pick a fourth pacer or an additional third spinner considering that the wickets will be on the slower side at this time of the year in England.

Starting with the number four slot, while there have been talks ranging from Ambati Rayudu, KL Rahul, Ajinkya Rahane and Shreyas Iyer, it could well be that the team management will continue with the recent experiment of playing Vijay Shankar at the number four slot with Rahul being drafted as the official back-up opener as well as the answer to all the other top-order batting slots if and when any of the other batsman in the top line-up is injured or out of form.

Former India skipper Sunil Gavaskar has also spoken about how Rahul can fit into any position in the batting order considering he is an opener and that his IPL form is something that cannot be ignored. Interestingly, former India opener Gautam Gambhir has also proposed the name of Sanju Samson. But the Kerala and Rajasthan Royals batsman has just not been consistent enough.

With the team management making it clear after the Nidahas Trophy that Rahul will be seen primarily as the third opener, he will only walk into the team as the back-up opener and not as a number four batsman. The fact that Shankar has continued to bat at number three or four in this Indian Premier League (IPL) for the Sunrisers Hyderabad is another hint that the team management might have asked him to carry on batting at the top.

While he told IANS on Friday that the move in the IPL wasn’t aimed at sealing the number four spot in the showpiece event, he does look like one of the favourites to seal the much-debated spot in Indian cricket at present.

What this also means is that the likes of Shreyas Iyer or Ajinkya Rahane will be out of the equation. While Iyer has been scoring heavily without the selectors acknowledging his efforts, Rahane has somehow failed to get the backing of the selectors even though he has proved himself whenever given an opportunity. In fact, he was a hit in the middle-order in the last ODI series that he played against South Africa.

The rest of the batsmen pick themselves with Shikhar Dhawan and Rohit Sharma starting at the top, followed by Virat Kohli, MS Dhoni and Kedar Jadhav. Hardik Pandya fits in as the all-rounder who will also be looked at as a finisher.

Now the dilemma of the second wicket-keeper. This is another position that the selectors need to solve. They need to decide whether to pick Dinesh Karthik or Rishabh Pant. While Pant the batsman is seen to have the X-factor that is needed to provide the push going into the later stages of the game, Karthik is considered a more experienced campaigner and one who would be able to keep calm on the big stage like the World Cup.

Who between the two finally seals the second wicket-keeper’s spot is likely to be the most discussed topic during the meeting on Monday. Pant also has the backing of the recent show in the IPL where he has impressed all with his hitting prowess.

After this comes the bowlers and while the spin duo of Kuldeep Yadav and Yuzvendra Chahal pick themselves, the pace bowling attack will undoubtedly have Bhuvneshwar Kumar, Jasprit Bumrah and Mohammed Shami.

But here comes the third and final issue. While there have been talks of adding the fourth pacer, some in the team management also feel that three pacers are enough as Pandya can always act as the fourth bowler.

With the wickets likely to be more on the slower side in England during the World Cup (May to July), the team management is toying with the idea of dropping the idea of picking another pacer and drafting Ravindra Jadeja into the team. While he is known to be a brilliant fielder, his batting will also ensure that the lower-order looks better on paper.

If the team still does look at the extra pacer, Navdeep Saini could be the dark horse. But for now it looks like Jadeja is leading the race.

While both Prasad and captain Virat Kohli have made it amply clear that players’ performance in the IPL will not be considered, sources in the know of developments told IANS that it will indeed be difficult to ignore some of the breathtaking knocks played by the likes of Rahul and Pant among others. 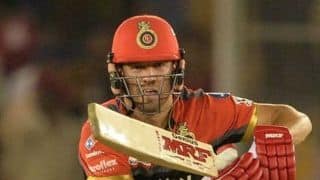