After six years in the wilderness, West Indies wicket-keeper Carlton Baugh is enjoying a new lease on his international career. He made his Test debut as a 20-year-old against the touring Australians back in 2003 but survived just five matches over the next year before being discarded. 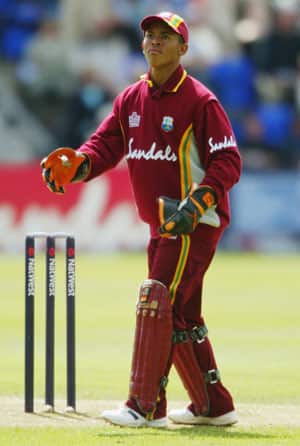 After six years in the wilderness, West Indies wicket-keeper Carlton Baugh is enjoying a new lease on his international career. He made his Test debut as a 20-year-old against the touring Australians back in 2003 but survived just five matches over the next year before being discarded.

The pint-sized Jamaican gained a shock call up for the tour of Sri Lanka last year after incumbent Denesh Ramdin was dumped, and has been turning in a number of decent performances since.

“The hard work that I have been putting in off the field is what is helping me when I go onto the field,” the 29-year-old said. “I always try to do extra (drills) after our training sessions are finished to improve my skills as well as my concentration.”

Baugh was a leg-spinner in his early school days but switched to keeping wicket while a student at the Wolmer’s Boys School in Kingston.

He is the latest in a long line of West Indies Test wicketkeepers the school has produced with Karl Nunes, Ivan Barrow, Gerry Alexander, Jackie Hendricks and Jeffery Dujon the others.

“As a young cricketer I always liked wicket-keeping but there was no place in the team for me as a keeper so I used to bowl some leg-breaks,” Baugh explained.

“Whenever I got the chance to go behind the stumps I would take it and try to improve my keeping. Jeffery Dujon was my idol growing up. I knew he went to Wolmer’s and I wanted to follow in his footsteps and become an outstanding wicketkeeper as well.”

He put his talents on show during the second day of the ongoing first Test here when he held three sharp catches and pulled off a brilliant stumping to dismiss the dangerous Virender Sehwag in India’s first innings.

Baugh collected a ball from leg-spinner Devendra Bishoo down the leg side and waited for the batsman to lift his foot before swiftly removing the bails, in a superb exhibition of timing and judgement.

The dismissal sparked a collapse as India were bundled out for 209, handing West Indies a 116-run lead.

“My timing had to be spot on. It is something I have been working on … to look for those opportunities to get wickets for the team,” Baugh said.

“In the series against India at home earlier this year I noticed that some of the Indian batsmen would sometime ‘off-balance’ when they played the spin so I was looking for a chance to get a dismissal and get that breakthrough. I worked well today (Monday).”

David Williams, the West Indies assistant coach and a former Test keeper, has been working closely with Baugh and said he was delighted with his progress.

“I am very happy with what I am seeing. The stumping of Sehwag was unbelievable, the way he moved to get himself in the right position was a joy to see,” said Williams who played 11 Tests and 36 One-Day Internationals between 1988 and 1998.

“His timing had to be spot on. The catching, especially low down, was also good. He is reaping rewards for the hard work. He is very calm behind and stumps and you can see he is enjoying his cricket.”

Captain Darren Sammy joined in the praise for Baugh, noting that his dismissals had come at crucial times for the Windies.

“The efforts of Carlton Baugh really helped the team. He held on to some difficult chances, some crucial dismissals. That catch of V.V.S Laxman and then the stumping of Sehwag, these are things that motivate the team,” Sammy was quoted by IANS.