A fiercely combative cricketer, Gambhir played vital knocks in India s World Cup wins in 2007 and 2011. The left-hand batsman also lead Delhi Daredevils and the Kolkata Knight Riders in the IPL, claiming the title twice in the IPL.

A fiercely combative cricketer, Gambhir played vital knocks in India s World Cup wins in 2007 and 2011. The left-hand batsman also lead Delhi Daredevils and the Kolkata Knight Riders in the IPL, claiming the title twice with KKR in the IPL.

“So, here I am. After more than 15 years of cricket for my country, I want to retire from playing this beautiful game,” said Gambhir in the video.

Gambhir most notable knock was 97 off 122 deliveries that came in the 2011 World Cup final against Sri Lanka. In 2007, Gambhir top-scored for India with a 54-ball 75 in the final of the inaugural ICC World T20I and finished the campaign as the highest run-getter of the tournament.

“Despite all the aches and pains, fears and failures, I won t mind a repeat of this in my next life too. But obviously, with a few more wins for India, a few more hundreds, and maybe, in the next life, a few more five-wicket hauls as well. But this may sound a little wishful, but then I have seen wishes do come true,”he said.

Two World Cups, highest in the final of both these games, is a stuff dreams are made of, and I only had this dream of winning the World Cup for you all. I think someone up there was writing my script, but now, he has run out of his ink,” he added.

As an Under-19 player in 2001, he scored 212 runs against England under-19, adding 391 with Vinayak Manne (201) for the opening wicket which to this date remains this highest stand for any wicket in under-19 internationals.

Gambhir was among the best batsmen in the world and has secured a place in India s rich history as one of the most successful openers. His success, while very welcome, was unexpected in many ways.

“But along the way, he wrote some fascinating chapters, somewhere on the top is being part of the No. 1 Test team of the world. A trophy that I look at very fondly is the one I caught for being awarded the ICC Test batsman of the year in 2009,” he further added.

“For a purist like me, it is a reward of somewhat knowing where my off stump was. The historic series win in New Zealand and CB series in Australia will be reflected upon fondly, but I do hope the current Indian team Down Under can overshadow our feats.

I won t say the list is satisfactory as I feel I was good enough for a lot more. Along this journey, I have fostered some meaningful partnerships, none more than with you guys the supporters of Indian cricket the most important stakeholders,” he added.

“A big thanks for supporting me and the teams that I have played for. A special thanks to all my partners from Kolkata. We both wear our hearts on our sleeves, we both are very demanding and play with extreme passion. Maybe that is why, my love affair with Kolkata will continue forever.

Next on my thank you list are the groudsmen, curators and numerous dressing room attendants across India. They toiled for little or minimal returns, for what is essentially treated as a thankless job. I hope their life standards improve from what they are now. A big thanks to each one of you.

I also like to thank numerous net bowlers, who bowled to me so that I can become a better batsman. They travelled long distances just to help me practice. Thank you very much. My cricket coach, Mr Sanjay Bhardwaj stood with me through thick and thin of life. Whenever in trouble, why count on me. Sir, I don t know if I have made you proud, but I assure you sir that I gave it all that I had.

Sanjay sir introduced me to the other coaching influence of my life, the late Mr Parthasarathy Sharma, an institution in the art of batting. A lot of credit for my ability to play spin bowling should go to him. I hope I was worth his time. Former Australia opening batsman Justin Langer was a huge help too. I turned to him in 2015 for some advice, I got that in plenty and some really heavy praises.” 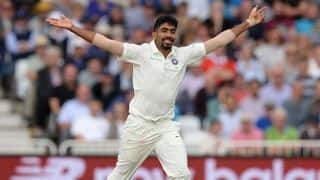 Our bowlers know what line and length to bowl in Australia: Cheteshwar Pujara