"I think this competition is extremely tough to win consistently over a long period of time."

Kings XI Punjab need a huge win to make it to the play-offs and their head coach Brad Hodge today admitted that the team’s middle order hasn’t fired as expected and relied on only a couple of bowlers. Kings XI Punjab, led by Ravichandran Ashwin, had a great start to the tournament but slumped after that.

They narrowly lost to Mumbai Indians by three runs at the Wankhede Stadium on Wednesday night. They need a thumping win against the MS Dhoni-led Chennai Super Kings to make it to the last four and they are also dependent on other results.

“I think this competition is extremely tough to win consistently over a long period of time. We are a new team with a new captain and we have learnt a lot from lessons of success and failure. “I think realistically, our middle order hasn’t fired as much we would have expected and we are too reliant on a couple of bowlers who have kept us in the game,” Hodge told reporters on the eve of the team’s crucial clash against the Chennai Super Kings.

Hodge also admitted that the team was not consistent in the cash-rich tournament. “We haven’t had consistency across the whole IPL, where when our match-winners haven’t fired, nobody has been able to pick up the pieces. So, for us, I don’t think it’s going wrong, we have won 7 games like most other teams, if we would have managed to get over the line in couple other close ones then we would have been where we wanted to be but unfortunately, it didn’t happen,” the former Australian batsman said.

“At the halfway mark we were in a strong position but we have tight losses and now we are in position where we have to watch other teams but we will go about our business today in same fashion, and hope we get a chance tomorrow (afternoon) to make an impact,” the head coach added.

Asked whether it was veteran batsmen Yuvraj Singh‘s last season, Hodge refused to give a direct answer. “I am not here to determine what Yuvraj does after tomorrow, it’s completely in his hands. He must have played cricket, that what cricket players do, so hopefully, he comes out and performs whether it’s tomorrow, next day or in years time, his legend in Indian cricket. “So hopefully, it’s not but sooner or later good times must come for him, but when that is, I am not the person to answer,” Hodge said. 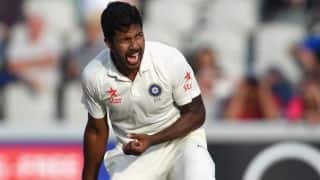 Varun Aaron believes he is bowling at his best; hopeful of national comeback