Delhi Daredevils (DD) have posted 181 for 4 against Royal Challengers Bangalore (RCB) in Match 45 of VIVO IPL 2018. Rishabh Pant regained the Orange Cap from Kings XI Punjab’s (KXIP) KL Rahul, and once again led from the front. His 34-ball 61 was backed up by 17-year-old IPL debutant Abhishek Sharma’s 19-ball 46*. This total can chased on this wicket, and small venue, hence both sides have a realistic chance to earn a win.

DD were off to a poor start. RCB skipper Virat Kohli started with Yuzvendra Chahal to capitalise on Prithvi Shaw and Jason Roy’s flaws. Both like the ball to come onto the bat, and struggled against Chahal, who was slow through the air. Neither looked fluent, and Chahal got both inside his first 10 balls. It again came on DD’s in-form pair, Iyer and Pant, to rescue them from 16 for 2. They didn’t disappoint.

Iyer, completely aware of an inexperienced middle-order, resorted to singles. Pant, on the other hand, was in no such mood. After all, he was fresh from that mammoth 128* against Sunrisers Hyderabad (SRH), where he didn’t spare the best attack of the tournament. Pant attacked Mohammed Siraj, and took the odd chance against both Moeen Ali and Chahal. His 7th IPL fifty brought DD back on track.

Pant finally went back to the hut for another blistering half-century. Iyer followed suit. He had never got going, but may have adopted a cautious approach due to lack of batting depth. Even then he should have scored quicker than his 35-ball 32.

RCB had two new batsmen in the middle ahead of the final overs. However, they lost the plot by bowling slow and short on the small Kotla ground. Tim Southee and Siraj were hammered by Under-19 star Abhishek. Playing his maiden IPL match, Abhishek grabbed the momentum, the highlight being a clean, straight six off Southee despite him holding his shot. His clear hitting, complimented by Vijay Shankar’s occasional boundary, steered DD to a challenging score. DD managed 56 runs in the last 4 overs. 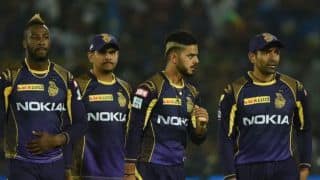