Match 47 of VIVO IPL 2018 has complicated things for reigning champions Mumbai Indians (MI). They failed to defend a modest 169 against Rajasthan Royals (RR). Their winning streak, a regular feature in the second half of their IPL campaigns, was brought to an end by Jos Buttler. Buttler smashed his fifth consecutive fifty (all of them as opener) to take RR closer to Playoffs. With this win RR move to fifth spot, toppling MI, who now have their task cut out to stay alive in the tournament.

Chasing 169, MI got rid of D’Arcy Short early. Short edged one to the wicketkeeper, giving Jasprit Bumrah his first scalp of the night. Skipper Ajinkya Rahane took charge early as Buttler took his time to settle. Then Buttler took over and Rahane resorted to a supporting role. They added a valuable 95 in 74 balls. Rahane struck at just over 100, while Buttler exploded once he decided enough was enough.

Rahane perished for 37; handing Hardik Pandya his 17th wicket of the season. Just when MI thought they had an opening, Buttler changed gears without any discomfort. Maybe he had an eye on the net run rate; or perhaps he simply didn’t want to take the game deep.

Buttler took on Mayank Markande whenever the latter overpitched. He also attacked Hardik and Bumrah once Rahane fell. At times he stayed inside the crease himself back at the crease, used the bottom-hand and timed almost everything in his zone. He certainly doesn’t seem to do anything wrong since he has taken over the opening slot. During his 53-ball 94* (9 fours, 5 sixes), Buttler equalled Virender Sehwag’s record of 5 consecutive IPL fifties (5). Virat Kohli is next, with 4. He also drew level with Glenn Maxwell with 3 consecutive eighties.

Requiring only 16 off 18 balls, RR cruised past MI with 12 balls to spare after; boosting their net run-rate after Sanju Samson clobbered Hardik for two sixes before getting out. Hardik now has 18 wickets. 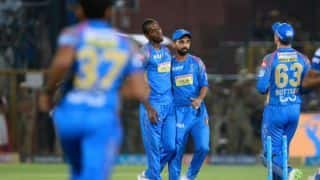 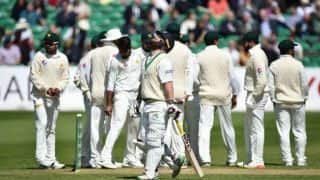