Mankad's son Rahul said that the game has changed and there is little room anymore to take the moral high ground.

While the mankad debate has taken centre-stage since Ravichandran Ashwin s dismissal of Jos Buttler during the Rajasthan-Punjab match of the Indian T20 League, there is one person who s not so happy about term mankad Vinoo Mankad s son Rahul.

India s Vinoo Mankad, after whom the rule was named, was among the earliest to run a non-striker out. The incident rolled out during India s tour of Australia on December 13, 1947 when Mankad had ran out Bill Brown when the latter had left the crease before he delivered the ball.

I have spoken to many greats, including Sunil Gavaskar, the Chappells (Greg and Ian) and Michael Holding and they have no issue with this form of dismissal. But this doesn t die as a controversy, it s unfortunate that my father s name is tainted because of this, the 63-year-old Rahul, one of the three sons (Ashok and Atul were others), told Mumbai Mirror on Wednesday. (ALSO READ: Questioning Ashwin s character because he mankaded Buttler is totally wrong: Rahul Dravid)

The mode of dismissal is within the laws of cricket. It was not as if my father did it the first time, or it hasn t been done subsequently. I think it was Australian journalists who had coined the phrase (way back in the 40s). The ICC has already ruled that the mode of dismissal should be called run out. I think it s appropriate, Rahul explained.

Ashwin has been at the wrong end of many critics, who felt that the Punjab captain should have kept the Spirit of the Game into mind and being a role model, should have withdrawn the appeal.

The problem is that this mode of dismissal is now clouded with this spirit of the game stuff. The game has changed and there is little room anymore to take the moral high ground. Batsmen don t walk when they nick the ball, fielders claim catches when the ball has clearly bounced in front of them, they even tamper with the ball Where is the spirit of cricket then? And this is within the law, permissible, what more clarity do they want, Rahul, who had played 47 Ranji games for Mumbai, said. (ALSO READ: MCC weighs in on mankad debate after Ashwin-Buttler spat in T20 League match)

The point is it calls into question the players integrity and the spirit of the game. It has nothing to do with it. If you take the emotion out of the dismissal, then it s a simple run out.

Rahul revealed that there was some history behind the mankad dismissal it. If you read Ray Robinson s or Donald Bradman s books, not much was made out of it. There was history between Bill Brown and my father. It happened first time against Queensland. The Test was after the Queensland game. In the Queensland game, Brown was warned three times. He was run out in the Queensland game as well. This guy knew, he was a serial offender. (ALSO READ: It s too late to say sorry Mr. Ashwin, you will be remembered for that low act: Shane Warne)

My father regretted it, he obviously wished it would not have happened. But at the time, he felt that it was the only course of action left, because Brown refused to heed warnings. When I met Bill Brown just before he passed away in Australia, he said he was fine. He said to me what Vinoo did was well within the rules. No bitterness, they actually parted as friends. The entire Australian team stood by my father. 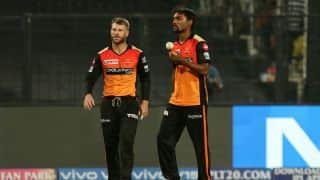