The other two captains to have earlier reached the landmark were MS Dhoni and Gautam Gambhir.

Virat Kohli achieved yet another record in his career as he became the third captain to lead an Indian Premier League (IPL 2019). Kohli walked out in his 100th match as captain in Jaipur on Tuesday where Rajasthan Royals (RR) host Royal Challengers Bangalore (RCB) where both teams are eyeing their first win after losing all their opening three matches.

Kohli, who has been leading RCB since 2011, has the poorest record as captain of the side in the cash-rich tournament with 44 wins, 50 defeats, two ties and three no results.

The other two captains to have earlier reached the landmark were MS Dhoni and Gautam Gambhir. Dhoni had led IPL teams in 162 matches of which 148 have been for Chennai Super Kings (CSK), while the rest were for the defunct Rising Pune Supergiant.

Gambhir meanwhile, donned the captain s hat in 129 matches, including 108 for Kolkata Knight Riders (KKR) where he led the side to two titles and the Delhi Daredevils franchise, rechristened to Delhi Capitals this season. 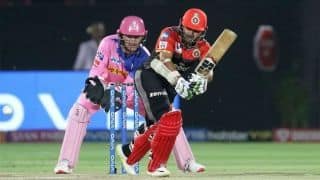