There was drama, high-voltage drama at Wankhede Stadium, Mumbai during the Indian T20 League 2018 opener between Mumbai and Chennai. While both teams fought really hard till the penultimate ball of the contest, some players also battled injuries to deliver for their respective sides. Hardik Pandya, despite being injured during the last ball of Mumbai’s innings, finished with 3 for 24. Kedar Jadhav moved a step ahead by succumbing hamstring injury to ensure a nail-biting win versus Mumbai on Saturday. The batsman had injured himself while batting on 14*, and later delivered the goods when the equation read 7 off 3 balls.

However, after the match, Jadhav had clearly mentioned that he is not sure of his presence for the next match as he is in distress. According to Chennai’s official Twitter handle, things have gone worse. Jadhav is set to undergo scans for his injury, and this puts his participation for Chennai’s upcoming matches in jeopardy.

Jadhav looked in good touch since his arrival amidst newbie Mayank Makande’s googlies. However, he couldn’t bat after the 13th over, and only came back to finish things off after Dwayne Bravo’s (30-ball 68) efforts. 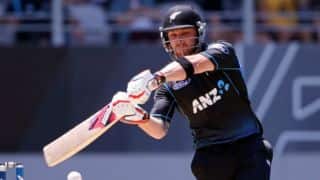