Sridhar was given an extension of two years following India's brilliant fielding during the World Cup, but somewhere in the last six months, he's found the going slightly tough with surprising fielding lapses Fielding coach R Sridhar has admitted that India’s performance on the field has been average to say the least. India’s fielding has been sloppy in the ongoing tour of New Zealand, with catches being dropped, overthrows being conceded and Sridhar acknowledged the fact that the standard of fielding is nowhere close to what it was during the World Cup.

“The West Indies series at home was somewhere we really dropped. We were average, to say the least. But definitely we have not lived to the standards as we did in the world Cup or even in the build-up to the World Cup in the last couple years,” he said on the eve of the second ODI.

Sridhar was given an extension of two years following India’s brilliant fielding during the World Cup, but somewhere in the last six months, he’s found the going slightly tough with surprising fielding lapses. He’s informed that the team management has been taken in loop in terms of a grading system following India’s dip in fielding standards.

“We keep reminding the players about attention to basic detail,” Sridhar said. “In a T20 game, each fielder has to be his own captain. He need not wait for the captain to move him or the bowler to move him in a certain direction or to a certain position.

“We try and tell them to think ahead of the game, you as a fielder captain yourself, see which way the breeze is, which way the batsman’s tendencies to hit are, what’s the bowler’s plan and position accordingly. So we empower the fielders so that they can become their own captain and they can take decisions on their own because the captain has got too much on his plate at certain times. That’s what we speak about.

Another significant change that seems to have affected India’s fielding is the lack of special fielding sessions, which was a common sight during the World Cup. Since their arrival in New Zealand late last month, only one mandatory fielding session was conducted which was prior to the start of the T20I series while the rest have all been optional.

“That’s the nature of the current schedule, we have to take it. We have to play around it but we hardly had a session during the entire T20 schedule. There is not much we can put in in terms of technical work on the ground,” he pointed out.

“Apart from that, we do have a look at the videos and see what led to an error. It need not always be a technical error every time there is a fumble or a dropped catch. We need to know whether it could be a tactical position error or the mind not being in the right place, so many things that can lead to it. It is a tight schedule but it is not a complaint and it is not an excuse at all. We need to be better.”

Along the way, workload management becomes an integral part leading to a player’s performance on the field but Sridhar believes the current fitness levels of his players allows them to adapt to different conditions quickly.

“We do monitor their workloads. We will be lying to ourselves if we say no, they are fresh as a daisy every time they go on to the park. They are not, because they are travelling and playing games,” he said.

“But the current fitness levels of this team is really good, so that in turn helps to recover from the workload and fatigue quickly and be fit on the park. But we do keep that in mind but I don’t blame fatigue for the down curve.”

While there have been a few moments of brilliance in the field by captain Virat Kohli, at times, some of the easiest catches going down has hurt India. During their six-wicket loss to new Zealand, Kuldeep Yadav spilled an easy catch of Ross Taylor when he was batting at 12. As it turns out, Taylor’s innings made the different at the end.

“That catch should have been taken. Probably it was after his first over, maybe he was thinking about his previous over, could be anything. It could not be a technical aspect at all. We are trying to get better but we were average. There is no doubt about that. We can get better,” Sridhar said. 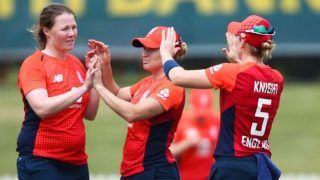