Young spinner Shahbaz Nadeem, who helped Delhi Daredevils record a comprehensive victory over Mumbai Indians in the IPL, said that his captain Virender Sehwag's encouraging words gave him the confidence to do well in the tournament. 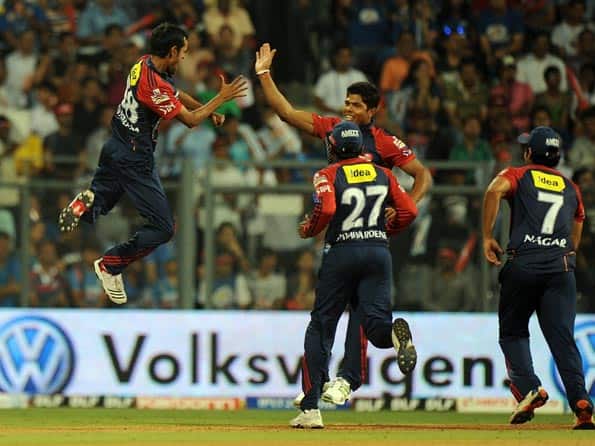 Young spinner Shahbaz Nadeem, who helped Delhi Daredevils record a comprehensive victory over Mumbai Indians in the IPL, said that his captain Virender Sehwag’s encouraging words gave him the confidence to do well in the tournament.

Nadeem took two wickets in three overs during powerplay in his side’s seven-wicket win over Mumbai last night to be adjudged man-of-the-match. In an earlier match against holders Chennai Super Kings, he did not take any wicket but conceded just nine runs in his three overs with Delhi registering a resounding eight-wicket win.

“After the game against Chennai, Virubhai said you go and bowl your normal balls and you will do well. I bowled three overs in powerplay today and I concentrated on my line and length and it paid me off,” said the 22-year-old Jharkhand player at the post-match press conference last night.

“The second wicket (of Richard Levi) was special. I bowled an arm ball and it worked,” he said.

“In that match (against Chennai), I bowled the 15th and 17th overs. Virubhai told me to go out and do what I know. He gave me the confidence. When we came here, Virubhai told me I did not allow even a batsman of Dhoni’s calibre to hit me. As far as I’m concerned he (Dhoni) is one of the best players of spin bowling,” said Nadeem.

Nadeem would, however, rated his performance against Chennai better than that against Mumbai last night.

“But I rate the last match (performance) better than this, though I did not get any wickets,” said the young left-arm spinner who took two for 11 in four overs.

Nadeem had figures of 3-0-9-0 against Chennai in the home game on April 10 that helped Daredevils restrict the holders for 110 before racing to an eight-wicket win.

Nadeem said the back-to-back victories over IPL’s two top-rated teams have given the Daredevils enormous confidence for the rest of the tournament.

“Mumbai is a very good team over the last 2-3 years and beating them gives us a lot of satisfaction. Last match we played (and beat) Chennai who are also a very good side. After beating these two teams we have a lot of confidence and are looking forward in this tournament.”

Nadeem said he did not expect to bowl in the powerplay period last night till Sehwag told him he’s bowling the second over when the team stepped on to the ground.

“Actually I didn’t expect to bowl the second over. When we were going out on the ground Virubhai said I am bowling the second over because he thought it will be difficult for them (openers Richard Levi and Davy Jacobs) to score as they are both foreign players.

“He (Sehwag) just gave me the ball and said just bowl whatever you know and it worked for our team,” said Nadeem.

He said he concentrated on maintaining a good line and length as otherwise in a Twenty20 game a spin bowler can be hit mercilessly.

“For me the most important thing as a bowler is to maintain line and length. If you are a spinner you are bound to get hit in this format and so you should be very precise with your line and length and I’m working on that.”

He said he had a mixed feelings about not being able to bowl to his idol Sachin Tendulkar who missed his fourth game running for MI due to a finger injury.

“I came to know only this morning that Paaji (Tendulkar) is not playing. He’s one of the greatest batsmen in the world. He’s my idol, so it would have been a great opportunity for me to bowl against him and at the same time there will be so much pressure bowling to your idol.” (PTI)