The batsmen might have finished the task but Pune Warriors skipper Sourav Ganguly did not forget to praise the bowlers after his side's seven-wicket win over Chennai Super Kings in the Indian Premier League, here today. 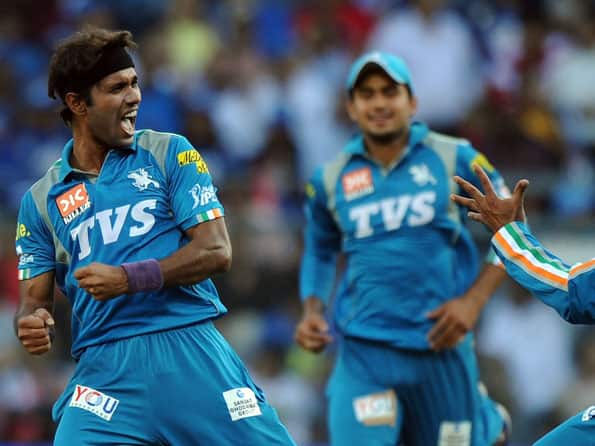 The batsmen might have finished the task but Pune Warriors skipper Sourav Ganguly did not forget to praise the bowlers after his side’s seven-wicket win over Chennai Super Kings in the Indian Premier League, here today.

After restricting the defending champions to 155 for five, the Warriors rode on Jesse Ryder and Steve Smith’s unbeaten knocks to shock Chennai here today.

“I am proud of the way the bowlers bowled, Ashish Nehra and Ashok Dinda did a good job. Smith has improved immensely from what I had seen last,” Ganguly said during the presentation ceremony.

The former India captain believed the win against Chennai will boost the side’s confidence.

“It was good, great cricketing pitch. When you win against a team like Chennai you get a buzz,” he said.

“It was even-steven, but our execution wasn’t good, we have struggled in the first six and the last few overs,” Dhoni said.

About his decision to hand the ball to Yo Mahesh for the last over, Dhoni said, “Just wanted to check who wanted to bowl, asked YoMi whether he wanted to bowl and he looked positive, so threw him the ball. That is how you learn.”

Though the Super Kings deep bat, Dhoni conceded they are not as strong in bowling.

Man of the Match, Jesse Ryder, said he was determined to bat till the end.

“I wanted to bat through the innings, I wanted to continue with that idea, Steven Smith made it easy for me to do that. This was a different track to the one we played on in the first game and made it easy to play the strokes,” the burly New Zealander said.

And Ryder also made a mention of the crowd that packed the stadium to the brim.

“The home crowd is amazing and they are supporting us well. Smith did a good job too. I didn’t want to throw my wicket away after getting a flier.” (PTI)