Yuvraj Singh, who is recovering from a rare germ cell cancer between his lungs, met his Pune Warrior team-mates and was seen in good spirits, enjoying his side's IPL match against Deccan Chargers at pune. 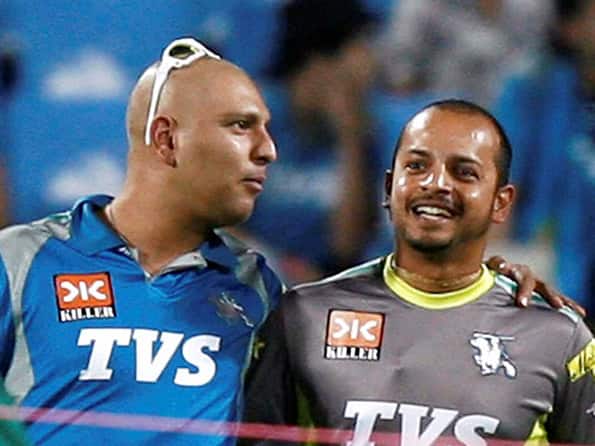 Yuvraj Singh, who is recovering from a rare germ cell cancer between his lungs, met his Pune Warrior team-mates and was seen in good spirits, enjoying his side’s IPL match against Deccan Chargers at pune.

Yuvraj, who returned to the country earlier this month after treatment in the United States for more than two months, was seen waving to the crowd at the Subrata Roy Sahara Stadium and talking to his teammates.

He hugged Robin Uthappa and Murali Kartik before having a chat with team owner Subrata Roy’s son Seemanto Roy.

Yuvraj said he was feeling better and aiming to return to cricket in two or three months time.

“I’m starting to feel better, eating a lot of organic food. Doesn’t taste good but I have to eat it. I’m starting to walk more. I can’t say a time (when he’ll come back). Maybe two or three months. Depends on my body. Hopefully I’ll come back fast,” Yuvraj said just before the match.

“I wanted to go and take guard today but I was happy to hit a few balls and see my team-mates. I am happy to see my friends and of course the crowd. It’s nice to be back among my team-mates and friends. It’s special today,” he said.

Yuvraj, who captained Pune Warriors last season, thanked the fans, friends and well wishers for supporting him in his hour of crisis.

“It was hard for me to digest when I was diagnosed. But that’s the way life is. I’ve fought a tough battle, it’s been gruelling for me and my family. I’ve had a lot of support, a lot of love. If you have your family’s support it helps. I had support from the nation,” an emotional Yuvraj said.

“At the moment I’m fine, hopefully I can return soon.

Chemotherapy is tough on the body, but I was positive. I want to thank the fans, friends and the BCCI for their support,” he added.

Asked about the chances of Pune Warriors in the tournament, Yuvraj said, “The team is playing well. Dada (Sourav Ganguly) is leading the team well. The younger players are doing well. You never know we can go to the final.”

Pune skipper Ganguly, meanwhile, was happy that Yuvraj came here to boost the morale of the team.