Punjab won by 50 runs
Man of the Match: Azhar Mahmood 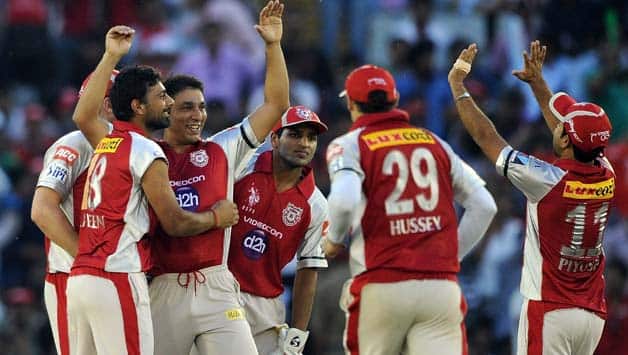 Chasing 184 Mumbai started the innings in the worst possible manner. Glenn Maxwell was out for naught in the first over when tried to heave Praveen Kumar. The bat took the edge which flew to third-man.

Aditya Tare, man-of-the-match from the last game showed positive intent right from the outset.  He pulled Azhar Mahmood in front of square-leg for a six.  The next ball was cut between point and covers for a four. He lofted Sandeep Sharma over long-on for a six. But off the very next ball went for an impetuous shot and failed to gauge Sandeep’s swing. He was castled for 22 off 12 deliveries.
Ambati Rayudu came in to bat at No 3. He played some enterprising shots especially in the last Powerplay over off Sandeep. Two pick up shots, rooting from the crease got Rayudu’s innings going. After the Powerplay overs, Punjab put some pressure on Mumbai. Parvinder Awana and Piyush Chawla gave away five and three runs respectively in the two overs after the field restrictions. Rayudu attempted a hook going inside the line of the ball off Awana. The ball hurried on to Rayudu who gloved it to Gilchrist.

Dinesh Karthik was beaten in flight by Chawla in the tenth over. Karthik played an uppish drive and was caught by Chawla for naught.  In Chawla’s next over he lured Mumbai’s captain Rohit Sharma into playing a false shot: an uppish cover drive. David Miller dropped Rohit but that miss didn’t prove that costly as Chawla bowled the captain with a top-spinner. Rohit missed a cut shot and Mumbai batting was folding up.

The run-chase was down to Kieron Pollard. He bode his time before unleashing a lusty blow off Parvinder Awana. The ball was lost. In the 16th over, Pollard tried to put pressure on Sandeep who overstepped.

Sandeep had Pollard caught at long-off but he had to bowl to Pollard who had a free-hit. The batsman got a lot of elevation and was caught again at long-off. Pollard had enough time to run two. Off the next legitimate delivery Pollard was caught at long-on by Miller. The match was a foregone conclusion as Mumbai needed runs at 16.75 runs per over (RPO). Mumbai had given up.

Adam Gilchrist bowled the final over of the innings when Mumbai needed 51 off the final over. He got Harbhajan off the first delivery in IPL cricket when the batsman tried to heave Punjab captain over long-on.

Earlier Mahmood (80 off 44 deliveries) and Shaun Marsh (63 off 47 balls) put on 144 off 14.2 overs for the third wicket which ensured Punjab reached a competitive total of 183 for eight. For Mumbai, Lasith Malinga picked up three for 39 and in the process became the first bowler to pick up 100 IPL wickets.

Man of the match: Azhar Mahmood