Former captain Aravinda de Silva on Saturday, chose to react diplomatically over Sri Lankan cricketers' exclusion from the IPL matches in Chennai by stating that the players were grown up enough to take their own decisions in life. 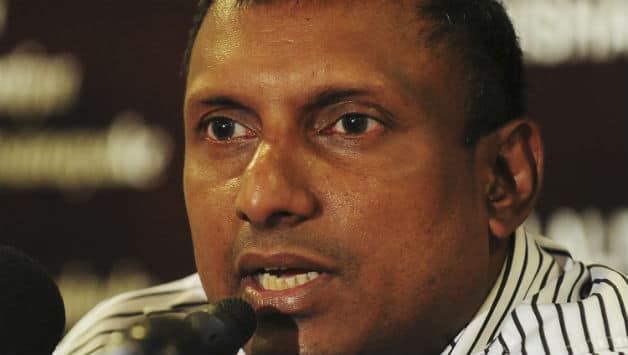 Former captain Aravinda de Silva on Saturday, chose to react diplomatically over Sri Lankan cricketers’ exclusion from the IPL matches in Chennai by stating that the players were grown up enough to take their own decisions in life.

“They’re all grown up enough to decide what they want to do in life. They understand the situation well and I think those guys decided to go,” de Silva said here.

The IPL’s Governing Council has decided that the matches in Chennai will not feature any Sri Lankan cricketers or match officials, following growing political tensions, stemming from the anti-Sinhalese sentiments in the Indian southern city.

The 1996 World Cup-winning hero, however, said that sports should be kept away from politics.

“I think politics should be kept completely outside sport. Sport is something that bridges differences between various people. The best thing is to forget about politics and continue sport as sport,” de Silva said on the sidelines of the Red Bull Campus Cricket World Series Finals being played at the R Premadasa stadium.

Asked about the comments by World Cup-winning captain Arjuna Ranatunga that the Lankan players should have boycotted the IPL due to their non-participation in Chennai games, de Silva said, “It’s an individual decision. As I said, I don’t believe in bringing politics into sport.

“I would have preferred if the youth had not been forced to make decisions on things such as politics. I can’t speak for anyone else,” said de Silva, who is considered as one of the finest batsmen Sri Lanka has produced.

De Silva said the Twenty20 format complements the other two formats of the game and should not be considered as a threat to Test cricket.

“It’s a concept that is going to be there for a while. It’s like when ODI cricket came through…it’s a format that is going to support the other two formats. There’s enough room for Test cricket and ODIs to grow.

“An individual’s skills and mental ability is tested more in those formats. T20 is more towards the entertainment side.

The revenues generated by T20 can support the other two formats. This is important for cricket to be sustained.

“Test cricket is something we’ve always enjoyed and it shows us the mental skills and real talent of a cricketer. ODI is a mixture of entertainment and playing under pressure,” he said.

De Silva said he would have liked to play the T20 format but it was not in his “destiny”.

“Obviously it would have been good to have played every format. But that was not my destiny. Probably, cricketers who came before me would have felt they missed out on ODI cricket.

Similarly, some of us missed out on T20 cricket and that’s what life is all about. What matters is to watch the game and enjoy it, try and help the youngsters for the future,” he said.

Talking about the Red Bull campus cricket, he said, “It’s important even at university level to have cricket. That’s the future of any country.

“Giving any sort of opportunity for the youth helps development in a country. Most of these kids would have sacrificed their sporting future to focus on studies. Giving them an opportunity to once more play sport is very special.”