Dirk Nannes manages to keep the in-form AB de Villiers off the strike for the first four balls. De Villiers gets the strike only on the last two deliveries, collects two runs on the fifth whereas he is caught for 64 off 32 on the last. 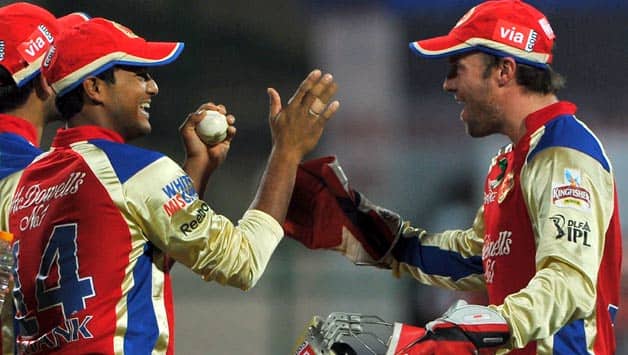 Ravindra Jadeja slams a boundary and a six to start off, Morris scores three from two as Chennai Super Kings register a four-wicket win in a thrilling IPL 2013 game. RP Singh oversteps on the final delivery of the game off which Chennai needed two runs, Jadeja plays a cut shot on a ball rising up and is caught at the third man. But by then, Jadeja and Morris had taken one run! Chennai win!

Ravi Rampaul strikes to remove the dangerous MS Dhoni on the first ball of the 19th over as Bangalore close in on big win. The Caribbean pacer further damages Chennai’s hopes of win as gets rid of Dwayne Bravo on the fifth ball, after being hit for a six. Chennai need a further 16 runs in six balls.

Jadeja gets a boundary on the third delivery off R Vinay Kumar and Chennai add eight more runs to take the count to 12 from the over. Chennai need a further 29 runs in 12 balls.

MS Dhoni smashes a boundary and a six off the first two balls to provide Chennai a good start in the over. But Ravi Rampaul bounces back on the next four to give away only three more runs. Chennai need a further 41 runs in 18 balls.

Ravindra Jadeja gets a boundary off the last ball – a thick edge flying towards the second slip as Chennai collect 11 runs from the 16th over. Chennai need a further 54 runs in 24 balls.

Chennai Super Kings go past the 100-run mark but there is a lot of work left to be done for MS Dhoni and company. R Vinay Kumar gives only four runs off his over and Chennai reach 101 for four after 15. Chennai need a further 65 runs in 30 balls.

Chennai Super Kings’ hopes are pinned on their skipper MS Dhoni as they need quick runs to get back in the game. Dhoni slams a six over the midwicket but Chennai need a few of them more. Chennai need a further 71 runs in 36 balls.

Syed Mohammad gets the key wicket of Subramaniam Badrinath as Chennai have stumbled in their chase of 166. Badrinath scored 34 off 29 balls wih the help of four hits to the fence. Chennai need a further 84 runs in 42 balls.

Badrinath smacks one down the wicket for a boundary as Chennai collect 10 runs off Murali Kartik’s third over. The Bangalore spinner has given away 29 runs off three overs without any success. Chennai need a further 88 runs in 48 balls.

The Royal Challengers Bangalore won’t mind it. Suresh Raina plays a poor shot to gift his wicket after scoring a fluent 30 off 22 balls to Syed Mohammad. Chennai’s big-hitting skipper  MS Dhoni walks in. Chennai need a further 98 runs in 54 balls.

Badrinath cuts between the point and short third man fielders to take four runs from the first ball. Another couple of runs takes Chennai to 64 for two halfway through. Chennai need a further 102 from 60 balls.

Raina collects four runs off Syed Mohammad’s first ball with a paddle sweep to put pressure on the young Bangalore spinner. Raina and Badrinath collect eight runs off that over.

Badrinath cracks a boundary over Murali Kartik’s head and adds nine runs with Suresh Raina to add another nine runs to the team total. Chennai are back in the game and Bangalore will be aiming for wickets.

Subramaniam Badrinath gets going with a boundary off Dan Christian, who is having a bad outing today. Chennai have got the much-needed momentum and now they’ll be looking for quick runs.

Suresh Raina is providing Chennai Super Kings the much-needed momentum as he clobbered three boundaries off R Vinay Kumar. Bangalore will be ruing the chance to take the third wicket, as RP Singh fails to take a regulation catch to send back S Badrinath.

Chennai Super Kings have stumbled in their chase of 166 against the Royal Challengers Bangalore. R Vinay Kumar ended his first over of the innings with the key scalp of Michael Hussey, leaving the hosts struggling at 10 for two.

Ravi Rampaul claims his first IPL wicket, getting Murali Vijay caught behind for two. However, Vijay didn’t seem happy with umpire Asad Rauf’s decision as he drudges back to the hut. Suresh Raina has joined Michael Hussey at the crease.

RP Singh gives away only one run to mark an impressive beginning for the Royal Challengers Bangalore. Chennai openers seem to be on a cautious note.

Caribbean pacer Ravi Rampaul, who makes his IPL debut today, starts off on a positive note as Chennai openers Michael Hussey and Murali Vijay manage only three runs in their chase of 166.

Dirk Nannes manages to keep the in-form AB de Villiers off the strike for the first four balls. De Villiers gets the strike only on the last two deliveries, collects two runs on the fifth whereas he is caught for 64 off 32 on the last.

AB de Villiers not only completes his half-century but punishes Chris Morris for being poor with line and length, taking 20 runs to push Bangalore past the 150-run mark.

Dwayne Bravo sends back his West Indies teammate Ravi Rampaul to the pavilion and manages to keep the dangerous AB de Villiers off the strike. Only five runs come off the over which included two extras.

Chris Morris provides Chennai the crucial breakthrough, getting Virat Kohli caught by MS Dhoni for 58. The South African pacer maintained pressure and struck on the last ball of the over to remove Dan Christian.

Dwayne Bravo fails to grab hold of a return catch to provide Virat Kohli a lifeline. No boundary in the 16th over but still Chennai leak 10 runs. Kohli completes half-century from 43 balls.

Another good over for the Royal Challengers Bangalore as AB de Villiers slams boundaries off the first two balls and quick running between the wickets ensure 16 runs. The third-wicket partnership is of 64 now.

Royal Challengers Bangalore are taking the attack to the opposition. De Villiers sweeps Dwayne Bravo for a boundary on the very first ball and another on the fifth ball. RCB score 13 runs in the over.

Good over for the touring side as skipper Kohli slams a six off Ravichandran Ashwin’s first ball of the over, and along with AB de Villiers he collects overall 12 runs from it.

Royal Challengers Bangalore skipper Virat Kohli is lucky to remain at the crease as the umpire failed to hear a nick off Dwayne Bravo’s fourth delivery of the over.

Virat Kohli claims back the Orange Cap in IPL 2013 with a single off Ravinchandran Ashwin. The Bangalore skipper looks in terrific form.

Ravindra Jadeja fails to keep the Bangalore batsmen under pressure, as after leaking five singles on as many delivery, bowls a short ball which is smashed by de Villiers for a boundary towards midwicket area.

Mayank Agarwal walks down the track to smack R Ashwin, who bowls a flat delivery outisde the leg stump, misses out completely and MS Dhoni does the rest. Bangalore lose their second wicket and collect eight runs in the over. The new man in, AB de Villiers, starts with a boundary towards the cover region.

Agarwal clobbered a six over Ravindra Jadeja and rotated the strike well with skipper Kohli as Bangalore take 11 runs off the eighth over of the innings.

R Ashwin kept the Bangalore batsmen quiet in his first over of the game, giving away only two runs.

Virat Kohli dispatches a short ball for a boundary towards the midwicket region to take Royal Challengers Bangalore’s score to 33 for one after six overs. Mohit Sharma once again manages to keep the Bangalore batsmen under pressure for most part of his second over.

Virat Kohli smacks Chris Morris over the cover fielder for a four, and follows it up with a couple as Bangalore
seems to be picking up after the early loss of Chris Gayle. Agawal was lucky enough as he played a loose shot off the final delivery – stopping the bat while attempting to hit a short ball – only to see it landing safely before the fielder at extra cover.

Debutant Chennai bowler Mohit Sharma bowls an impressive first over, giving away only six runs as Chennai Super Kings make a strong start keeping the Bangalore side under pressure in the 16th tie of IPL 2013. Agarwal is smart enough to collect a boundary on the last ball as Dhoni had taken out the slips.

Mayank Agarwal collects five runs, including a boundary, off Dirk Nannes to keep the scoreboard ticking. After keeping a tight line for first four balls, Nannes puts a ball back of a length outside off and Agarwal cracks a boundary between point and cover region.

Chris Morris provides Chennai Super Kings a big breakthrough as he gets rid of the dangerous Chris Gayle for four. Gayle had luck on his side when the second ball off Morris took an inside edge and fell near the wickets. But one delivery later, Gayle chased the ball outside off stump and edged it, which was collected by wicketkeeper MS Dhoni.

Royal Challengers Bangalore opener Chris Gayle smacks a boundary off Chennai Super Kings pacer Dirk Nannes’ last ball of the opening over. Nannes kept the dangerous Gayle quiet for the most part of the first over, but lost control in the last two deliveries, bowling a wide and giving room for a boundary towards mid-on.

Royal Challengers Bangalore will be without the services of Muttiah Muralitharan, who will be missing the game due to the protests against Sri Lankan cricketers in IPL. Muralitharan will be replaced by Caribbean pacer Ravi Rampaul.

For the Chennai Super Kings, Mohit Sharma has been included in the place of Ankit Rajpoot.