On a sluggish surface at the Sawai Mansingh Stadium, the Rajasthan Royals crawled along to 132 for six against the Kolkata Knight Riders in their Indian Premier League (IPL) encounter. 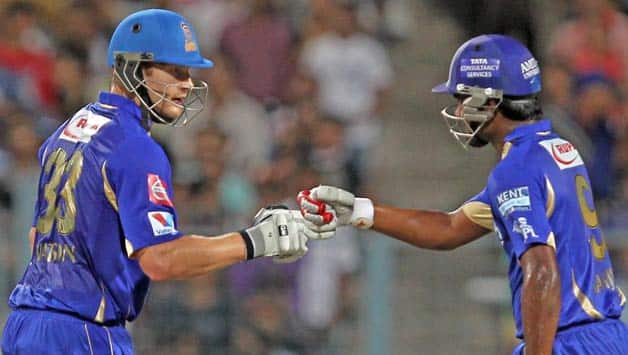 On a sluggish surface at the Eden Gardens, the Rajasthan Royals crawled along to 132 for six against the Kolkata Knight Riders in their Indian Premier League (IPL) encounter.

Sanju Samson produced another gem of an innings (40 off 36 balls) for the Royals to buoy them out of trouble after two quick wickets early on and again at halfway stage of the innings begged to derail them.

There were shades of his illustrious and elegant skipper, Rahul Dravid, in the shots he played. The flick off the pads was like watching a young Dravid impress one and all at Lord’s in 1996.

Samson’s innings may not have come for India, more so in the purest format of the game, but the impression the young lad has left after his last two knocks gives Indian cricket tremendous hope for the future.

After winning the toss and electing to bat first, the Royals opened with Shane Watson and Ajinkya Rahane, who looked good for the three overs that their partnership lasted, before haste from Rahane’s side got him stumped off Sachithra Senanayake’s bowling.

To the surprise of KKR, it wasn’t Dravid or who walked out at No 3, or Samson, but James Faulkner, perhaps in a bid to up the run-rate in the Powerplay overs. The experiment failed as Faulkner was to last all of four balls, before being dismissed via a mistimed square-drive that flew straight to point.

In walked Samson, high on confidence after his match-winning effort against the Royal Challengers Bangalore in Rajasthan’s last match. Together with the experienced Watson, Samson lifted the Royals out of the pit they were sliding in and carried them to the halfway point without further damage.

It was here that KKR skipper Gautam Gambhir brought in the second of his mysterious tweakers, Sunil Narine, as has been the norm throughout this tournament. And the West Indian struck straight away as Watson failed to read his wrong ‘un and was trapped plumb in front, breaking a good-looking 44-run stand.

Wicketkeeper-bat Dishant Yagnik did not last long either, before Owais Shah walked in at No 6 with the Royals at 83 for four in the 13th over, and in a spot of bother. Shah, in need of runs to keep his place in the side, combined with Samson to steady the Royals’ innings. The duo put on a cautious run-a-ball 34 before Samson holed out to Jacques Kallis at long-on, going for the big shot.

Still no Rahul Dravid as Stuart Binny came in at No 7, who lasted with Shah until the last over, but struggled to provide a late surge that would take them to a par total. In the end, Rajasthan could manage only 132, as Dravid got to face all of three balls coming in at No 8.

KKR would be happy with their efforts, and should bank on their batsmen to chase it down for a morale-boosting win, if not effective with regards to qualifying for the playoffs.