The CEO of Chennai Super Kings and the son-in-law of Board of Control for Cricket in India (BCCI) President N Srinivasan, Gurunath Meiyappan is set to be quizzed by a team of Mumbai Police that reached Chennai on Thursday, as reported by CNN IBN. A two-member team from Mumbai arrived here this morning to question Meiyappan with whom arrested actor Vindoo Randhawa was in touch, and CSK’s top executives, police said.

According to police, the call records of Randhawa, son of late wrestler-actor Dara Singh, who was arrested in the IPL betting case on Tuesday, indicated that the actor had made several calls to Chennai and some of them to Meiyappan.

“Vindoo made several calls to Meiyappan of the Chennai IPL. We may call the person in question to ascertain the reasons why these frequent calls were made,” an officer involved in the probe had said.

The 49-year-old actor was arrested for his alleged association with bookies. Vindoo, winner of reality TV show Bigg Boss season 3, was allegedly in touch with some bookies arrested in the scandal.

The actor also reportedly admitted to having facilitated the escape of two bookies — Pawan Jaipur and Sanjay Jaipur– to Dubai from Mumbai on May 17.

The duo had gone underground to evade arrest after Mumbai police busted the international betting racket with the arrest of key bookie Ramesh Vyas and three others on May 14,

The ongoing IPL found itself in a mess after speedster S Sreesanth and two of his Rajasthan Royals team mates were arrested last week by police, which claimed they received upto Rs 60 lakh from bookies for bowling one manipulated over.

A special cell of Delhi police arrested Sreesanth and his teammates — Ajit Chandila and Ankeet Chavan — in Mumbai on Thursday last for indulging in spot-fixing in at least three IPL matches as per arrangements with bookies, who have underworld connections abroad. 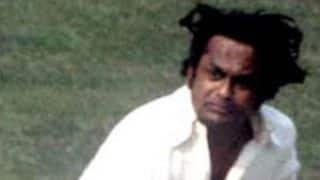