Amidst the uproar over the Indian Premier League (IPL) 2013 spot-fixing, the government on Sunday asserted that it would make efforts to put in place by July or August the new standalone law to deal with such "unfair practices" but ruled out promulgation of an ordinance on it. 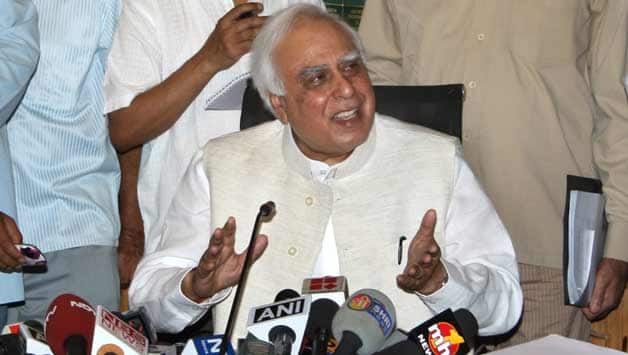 By Nilesh Bhagat and Ajay Kaul

Amidst the uproar over the Indian Premier League (IPL) 2013 spot-fixing, the government on Sunday asserted that it would make efforts to put in place by July or August the new standalone law to deal with such “unfair practices” but ruled out promulgation of an ordinance on it.

Law Minister Kapil Sibal, who initiated the process of framing a new law to tackle match-fixing and spot-fixing, said the government will hold consultations with all political parties and other stake-holders to ensure it sails through smoothly in Parliament.

Rajasthan Royals cricketers S Sreesanth, Ajit Chandila and Ankeet Chavan were arrested on May 16 for their alleged role in the IPL 2013 spot-fixing controversy.

BCCI President N Srinivasan‘s son-in-law Gurunath Meiyappan was arrested on Friday for his alleged role in the betting racket which followed.

In an interview with PTI, he agreed that such a law has been “much-delayed” as match-fixing allegations had first surfaced in the 1990s when Indian cricket team was touring Australia.

“We are keen to pass this law in July-August (when Parliament is expected to meet for Monsoon Session),” Sibal said about the new broadbased legislation which will cover all kinds of sports.

There will be a definition of “dishonest practices” and will include any gesture or act which can change the course or outcome of a match or a tournament.

It will deal with corporates, bookies, criminals besides the players, including international players.

Sibal ruled out promulgation of an ordinance, a route taken in case of urgency of any law, arguing that the present IPL tournament ends on Sunday.

The Law Minister said the first draft of the bill will be ready in a few days and it will be sent to the Sports Ministry for opinion of experts and others concerned.

Consultations will also be held with all political parties, he said.

“We will not move forward till all stake-holders are consulted… If there is a political will, it can be passed,” Sibal said, while emphasising the government is committed to enacting such law.

He said the main Opposition party BJP is on board on the broad issue of bringing the new law but details of the legislation needed to be discussed with all parties.

While not discussing the details of the proposed bill, he said it should not be “too draconian to dampen the spirit of sports” or “too lenient so that people feel they can get away”. There should be a “balance” in this law.

Explaining the necessity of the new standalone law, Sibal said the present laws are not sufficient. He said Section 420 in the Indian Penal Code (IPC) is the nearest to deal with such offences “but it has not led us anywhere.”

“The new law will help investigators while dealing with such unfair practices,” he added.

Sibal, a noted lawyer, said the IPC could have been amended to deal with such offences but Attorney General GE Vahanvati strongly favoured bringing a new standalone law.

Pakistan elect to field against Ireland in 2nd ODI