Sunrisers Hyderabad's bowlers put in another discipline performance to restrict Royal Challengers Bangalore to 130 in 20 overs. Virat Kohli and Moises Henriques fought hard, but the Hyderabad bowlers were always on top and did not let the Bangalore batsmen dominate at the Rajiv Gandhi International Stadium. 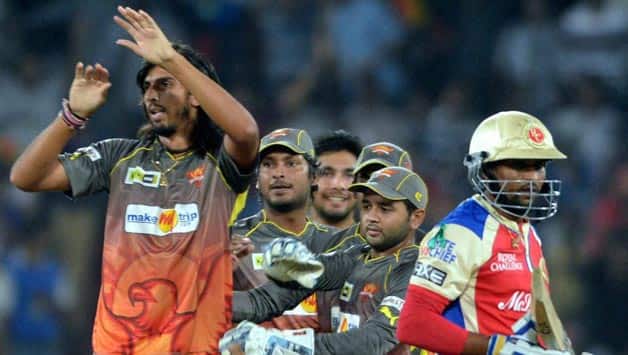 Sunrisers Hyderabad‘s bowlers put in another discipline performance to restrict Royal Challengers Bangalore to 130 in 20 overs. Virat Kohli and Moises Henriques fought hard, but the Hyderabad bowlers were always on top and did not let the Bangalore batsmen dominate at the Rajiv Gandhi International Stadium.

Bangalore captain Kohli won the toss and elected to bat first on a good looking wicket. From their game against Mumbai, Bangalore made one change as Moises Henriques replaced Daniel Christian. Hyderabad brought in left-arm spinner Ankit Sharma in place of Dwaraka Ravi Teja.

Dale Steyn bowled the first over to the dangerous firm of Chris Gayle and Tillakaratne Dilshan. Kumar Sangakkara then threw the ball to the rookie Hanuma Vihari to bowl his off-breaks in the second. The youngster had a dream start as Gayle was caught behind by Parthiv Patel while trying to cut off the first ball. Hyderabad celebrated catching the big fish as Vihari had a wicket off the first delivery he bowled in the Indian Premier League (IPL).

The move was taken only to get Gayle and Vihari was taken out of the attack soon after. Ishant Sharma then replaced him from that end. That move also worked wonders as Ishant got through the defence of Dilshan and shattered his off-stump. Bangalore were rocked early at 22 for two in the fourth over.

It was left to skipper Kohli to undo the early damage. He was in his elements as he lofted the left-arm spinner Ankit Sharma for four through the covers and then pulled Ishant with disdain for another. Bangalore finished the six over powerplay on 40 for two with Kohli and Karun Nair in the centre.

Bangalore slipped further as Amit Mishra dismissed Nair leg before in the eight over. Moises Henriques then joined Kohli and they gradually went about the rebuilding task. In the next five overs they added only 25 runs.
Kohli pressed the accelerator by carting Ishant for a huge six over long on in the 13th over. The ball sailed over the ropes and went into the second tier. He then cut Ashish Reddy for four. Then came the big jolt as Kohli lobbed a ball back to Reddy, who took a magnificent catch.

Henriques had the responsibility of keeping Bngalore in the hunt. He rotated the strike well an took the charge to Steyn in the 17th over with two magnificent shots that fetched him fours. Steyn struck back by dismissing Mayank Agarwal on the last ball of the over as the batsman lobbed a catch to mid-off. Agarwal was dropped by Ishant earlier and Hyderabad were happy that it did not cost them much.

Hyderabad continued to hold the aces and although Henriques fought, they were in control. Arun Karthik also holed out to mid-off, giving Thisara Perera his first success of the day.

In the slog overs, Henriques found the boundaries at least once every over, but there wasn’t an onslaught as such. He was let off in the penultimate over when third-man dropped a skier off Dale Steyn. However, the Australian all-rounder was dismissed in the last over as he tried to hit Ishant. Bangalore couldn’t add too many to their total.

Hyderabad now have to chase to record their second victory. In the first game they defended a modest total to win and now they have to pursue a score.