Home Ministry has said it can provide enough security personnel only after general elections.

The government on Friday said it will not be able to provide fool-proof security to Indian Premier League (IPL) matches due to the coming Lok Sabha polls.

“Due to general elections, it will be difficult to provide adequate security to IPL matches,” Home Minister Sushilkumar Shinde told reporters.

Sources said the Home Ministry has conveyed to Board of Control for Cricket in India (BCCI) that it would be able to provide adequate security personnel only after the general elections which are expected to be over by mid-May.

More than 1.20 lakh central paramilitary force personnel, in addition to state police forces, are expected to be deployed for the multi-phased Lok Sabha polls which are likely to be held in April-May.

The sources said that the Home Ministry has started preparing for the massive exercise of mobilising 1.2 lakh personnel from different paramilitary forces to be deployed for poll duties.

Paramilitary forces are also deployed in Naxal-affected states, Jammu and Kashmir and the north eastern states. 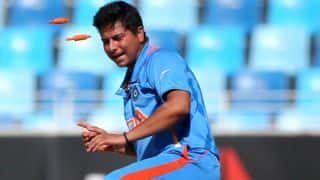