Delhi Daredevils suffered their seventh defeat in a row.

South African leg-spinner Imran Tahir says it was not lack of effort that has spelt doom for Delhi Daredevils (DD) in this Indian Premier League (IPL) edition, but, simply, lady luck was not smiling on them.

Delhi Daredevils suffered their seventh defeat in a row when they lost to Kings XI Punjab on Monday night.

“I think we are playing good cricket. It is just that luck is not favouring us. We are really working very hard. The team is going through a hard time and it is getting very tough to come out from there,” Tahir said at the post-match press conference.

From the onset it turned out to be a nightmarish campaign for the Delhi outfit and the situation turned from bad to worse with every passing game.

The Daredevils are languishing at the bottom of the table with just two wins from 12 games and pride will be at stake for the Kevin Pietersen-led side in their last two matches.

“We are working hard and believing in each other so hopefully we can finish with wins in our last two games. The guys are morally downbut I think they will be motivated after this game,” Tahir said.

Till not long ago Tahir was cooling his heels at his home in South Africa with his newly-born baby before an injury to paceman Nathan Coulter-Nile gave the Pakistan-born leg-spinner a chance to make his debut in IPL.

“I have been watching IPL for the last six years and always thought if I get an opportunity to play. I was blessed with a boy a month back, so I am trying to do well for him. He is small and I didn’t want to leave him but I gotmotivation from him,” said Tahir, who was the highest wicket-taker in the ICC World T20 2014 in Bangladesh.

“This is one of the best leagues in the world and anyone wants to be here and perform.”

With figures of three for 22 from his four overs, which includes the wicket of dangerman Glenn Maxwell, Tahir was pick of the bowlers for Daredevils on Monday night.

“According to me a leg-spinner is such a character, who, on his day can win the match for you if he is bowling well and has the support of the captain and the coach,” he said.

“It is great to get Maxwell?s wicket because he has been the star batsman this year. But what I feel is that Indian batsmen are far better equipped to play spin on these conditions than foreign players,” added the journey-man cricketer. 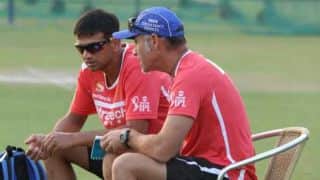